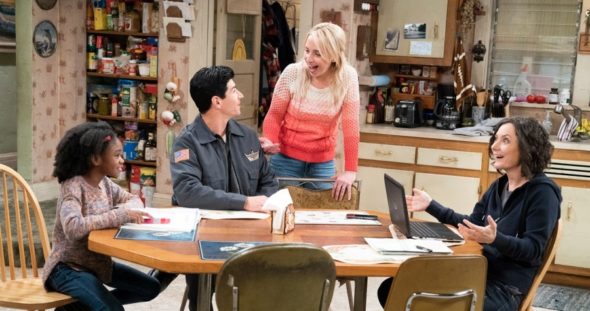 The Conner family will be back. ABC has renewed The Conners TV show for a second season for the 2019-20 network season. Though the show’s ratings dropped quite a bit over the course of its first season (as predecessor Roseanne’s did), The Conners remains ABC’s second-highest rated scripted series in the 18-49 demographic (behind Grey’s Anatomy) and is in first place in total viewers.

While the press release doesn’t mention it, word is that ABC has ordered 13 episodes for year two, possibly to take into account some of the series’ actors other commitments. That’s two more installments than season one had.

ABC PICKS UP TELEVISION’S NO. 1 NEW COMEDY, ‘THE CONNERS,’ FOR A SECOND SEASON

The ABC Television Network has ordered a second season of freshman hit comedy “The Conners,” Karey Burke, president, ABC Entertainment, announced today. Ranking as television’s No. 1 new comedy this season in Total Viewers (9.5 million) and Adults 18-49 (2.2/10), the self-starting ABC freshman led Tuesday’s 8:00 p.m. half-hour in Adults 18-49 by 16% over its nearest competitor. During its first season, “The Conners” improved its time period by 33% in Total Viewers and by 22% in Adults 18-49, posting 5-year highs for ABC in the half-hour.

“We are proud to be continuing the story of the iconic Conners family,” said Burke. “This team is fearless in their willingness to tackle contemporary issues with humor and heart, and I have no doubt they will continue to outdo themselves.”

In “The Conners,” this iconic family grapples with parenthood, divorce, dating, aging and financial pressures in working-class America. Through it all – the fights, the coupon cutting, the hand-me-downs, the breakdowns – with love, humor and perseverance, the family prevails. The spinoff has also received critical acclaim with The Daily Beast calling it “warm, hilarious and fun,” and The New York Times declaring the new sitcom “special, deserving of a prime-time slot on television every week.”

What do you think? Did you enjoy the first season of The Conners TV show? Did you think that this sitcom would be cancelled or renewed for a second season?

Since the beginning of 2017 , the language used by our own President seems to have no barriers . Roseanne Barr seems to be the only person to be held accountable for her words . How sad . Disney hold your ground . As a Roseanne fan even I have my limits .

The past 4 weeks I was waiting for it to come back on, I love the people on the show, just because Roseanne ruined it for the cast we all watched the show, ya Roseanne was funny but it was her show but she she wasn’t the only one on it… I’m glad it was renewed for another season

The Connors made it to season 2?? Wow that’s a shocker. ABC is biting the bullet to prove they were right in firing Rosanne, even if it costs them a bundle. Propping up the social warriors will hopefully get them into bankruptcy.

How did Becky’s husband Mark die?

Love the show! Miss it when it’s not on!

No. I thought it was slow paced. Boring and redundant.

I like the corners great show I watch ever week

Glad that the Connor’s was renewed. I enjoy watching the show.

We are very happy The Connors is being renewed! It’s a great show with a wonderful, talented cast!! The Connors do not need Roseanne to be a success!!!

I love the show, I think it handles real situations with being funny like the older Roseanne use too. I hope they do bring a lil more humor in to it. People need to quit thinking it is “Roseanne”. It is a spin-off basically (psst no Roseanne) That is why it is called “ The Conners”. You can’t compare it to “Roseanne”, yeah a lot of us wish she was still on, & the “Roseanne” show wasn’t cancelled. So like it, or critique it for the spin-off it is.

I like the show. Wasn’t sure if it would survive without Roseanne, but it did, and I’m glad.

The Connors (Rosanne) used to be a comedy! Funny a show to sit down and laugh with!!! NOW it’s NOT funny, deals with real life traumatic topics, death, unwed pregnancy etc. If I want to deal with reality for a. 1/2 hour I will TURN ON THE NEWS!!! Show sucks!

If Darlin does NOT like “The Conners” all she has to do is UNPLUG the TV!The reboot has done well!

Roseanne always was about “issues ” nothing has changed !

I agree the show sucks