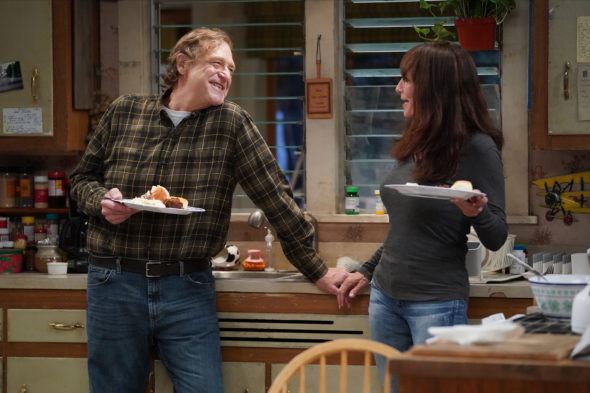 Can love continue to keep the family together in the third season of The Conners TV show on ABC? As we all know, the Nielsen ratings typically play a big role in determining whether a TV show like The Conners is cancelled or renewed for season four. Unfortunately, most of us do not live in Nielsen households. Because many viewers feel frustration when their viewing habits and opinions aren’t considered, we invite you to rate all of the third season episodes of The Conners here.  *Status Update Below.

What do you think? Which season three episodes of The Conners TV series do you rate as wonderful, terrible, or somewhere between? Do you think that The Conners should be cancelled or renewed for a fourth season on ABC? Don’t forget to vote, and share your thoughts, below.

This is such a well made and acted multi cam comedy. I really wish all the people on social media/whiners who forced ABC to fire Roseanne would repay the network by watching The Conners but sadly I’m realizing those who complain and get people fired are never going to support broadcast tv so I’m not even sure ABC should have axed Roseanne. They should have sent her on various talk shows to apologize, make it a learning moment, maybe had Valerie J make an appearance on the season premiere but something has to change with our cancel culture. Those who… Read more »

I rarely find a situation comedy worth watching on prime time. I learned to love the Conners family years ago watching reruns of the original show with Roseanne Barr. Having come from and still in a working class family the problems they faced were very real to me. When it was announced that the series was coming back, my husband and I made sure to watch it. Then it was gone with Barr, and then it was back. Quite often we cannot find it when it is supposed to be on. Come on, give it a chance, be sure to… Read more »

The Connors needs to continue. Everybody needs a good laugh now.

Please renew! The Connors is funny & relevant, addressing the plight of lower-middle-class America.

I got every Roseanne DVD..I have a marathon..every 2 months..I no every word..name.and who stars who played along with this famed family..can’t ever get Burt out..fam2me!

I agree with Betty and Mindi. This series needs Roseanne. Without her, the series is just so-so!

She was fired and will not be back on the show.

Frankly I felt with rosanne gone the show would fall apart …. however I absolutely believe it’s just even more funny and enjoyable to watch …. I’ve Rosanne didn’t carry the show all the actors on the show made it successful and then the Becky in rehab explaining her life WOW that was good …. I’m very hopeful the Conners have many more seasons after season 3 cause I like it even more than the Rosanne show ….. I like Rosanne Barr as an actor but I love all the characters in the Conners didn’t realize how funny and talented… Read more »

They really need to give Jackie more time, and back off of Darlene for awhile. She’s cast as such a grouch. kinds of pulls the rest of them down. Also would like to see more of Dan in the story lines. Would be nice if the lunchbox could for once actually be a hit, and a success. But still love watching it.

I love the show keep it coming

They need Roseann back, she made the show.

Thank you Betty, that’s how I feel!!!