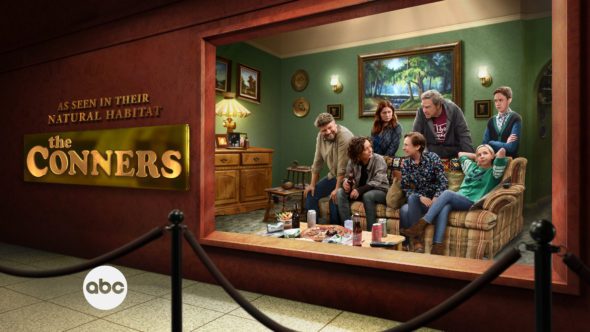 Despite some expectations that The Conners would be a flop, it has been one of ABC’s highest-rated sitcoms. This season, the characters are dealing with some big life changes. Will these changes keep the viewers tuning in, or could they hurt the ratings? Will The Conners be cancelled or renewed for season six? Stay tuned.

A family comedy series, The Conners TV show stars John Goodman, Laurie Metcalf, Sara Gilbert, Lecy Goranson, Emma Kenney, Ames McNamara, Jayden Rey, and Jay R. Ferguson. Katey Sagal and Nat Faxon recur. Picking up where the revival of the Roseanne sitcom left off, this series follows the extended working-class Conner family that’s led by widower Dan Conner (Goodman) and his three adult children — Becky (Goranson), Darlene (Gilbert), and D.J. (Michael Fishman) — as well as sister-in-law, Jackie Harris (Metcalf). Season five picks up after the double wedding of Jackie and Neville (Faxon) and Darlene and Ben (Ferguson). Meanwhile, D.J. has left to join his wife overseas, but his daughter Mary (Rey) stays in Lanford. Members of the Conner family continue to grapple with parenthood, dating, financial pressures, and aging in working-class America. Through it all, with love, humor, and perseverance, the family prevails.

For comparisons: Season four of The Conners on ABC averaged a 0.50 rating in the 18-49 demographic and 3.15 million viewers.

What do you think? Do you like The Conners TV series on ABC? Should it be cancelled or renewed for a sixth season?