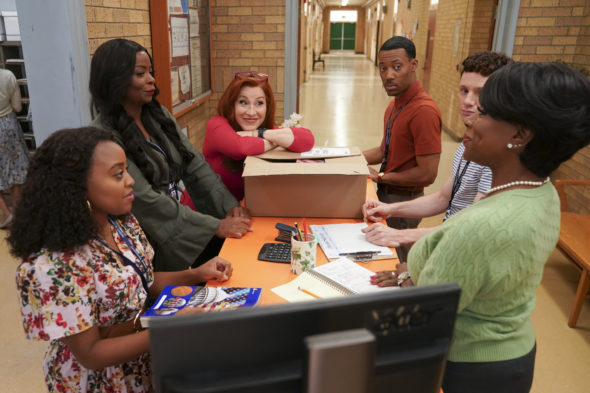 These teachers are giving it their all. Has the Abbott Elementary TV show been cancelled or renewed for a third season on ABC? The television vulture is watching all the latest cancellation and renewal news, so this page is the place to track the status of Abbott Elementary, season three. Bookmark it, or subscribe for the latest updates. Remember, the television vulture is watching your shows. Are you?

Airing on the ABC television network, the Abbott Elementary TV show stars series creator Quinta Brunson, as well as Tyler James Williams, Janelle James, Chris Perfetti, Lisa Ann Walter, Sheryl Lee Ralph, and William Stanford Davis. The story follows a group of dedicated, passionate teachers (as well as a slightly tone-deaf principal) as they navigate the Philadelphia public school system. Despite the odds stacked against them, the staff at Willard R. Abbott Public School is determined to help their students succeed in life. Though these public servants may be outnumbered and underfunded, they love what they do — even if they don’t love the school district’s less-than-stellar attitude toward educating children. The teachers include Janine Teagues (Brunson), Gregory Eddie (Williams), Melissa Schemmenti (Walter), Jacob Hill (Perfetti), and Barbara Howard (Ralph). Ava Coleman (James) is the school’s inept principal, and Mr. Johnson (Davis) is the eccentric janitor.

The second season of Abbott Elementary averages a 0.52 rating in the 18-49 demographic and 2.73 million viewers in the live+same day ratings (includes all DVR playback through 3:00 AM). Compared to season one, that’s down by 8% in the demo and down by 3% in viewership. While these numbers don’t include further delayed or streaming viewing, they are a very good indicator of how a show is performing, especially when compared to others on the same channel. Though other economic factors are involved, the higher-rated shows usually get renewed and the lower-rated ones get cancelled. Find out how Abbott Elementary stacks up against other ABC TV shows.

What do you think? Do you hope that the Abbott Elementary TV show will be renewed for a third season? How would you feel if ABC cancelled this TV series, instead?