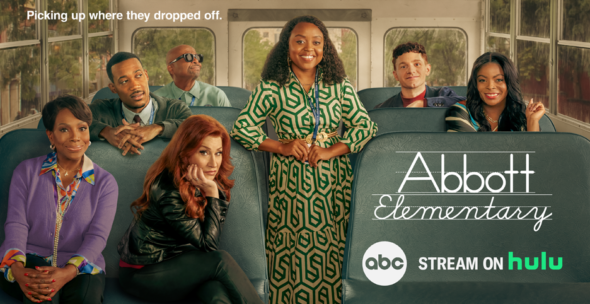 The Abbott Elementary series was one of only two new scripted ABC shows to be renewed last season. (The Wonder Years was the other.) The series won awards and also did well in the delayed ratings. Will Abbott Elementary continue to be a success and be renewed for season three, or could it be cancelled instead? Stay tuned.

A workplace mockumentary series, the Abbott Elementary TV show stars series creator Quinta Brunson, as well as Tyler James Williams, Janelle James, Chris Perfetti, Lisa Ann Walter, Sheryl Lee Ralph, and William Stanford Davis. The story follows a group of dedicated, passionate teachers (as well as a slightly tone-deaf principal) as they navigate the Philadelphia public school system. Despite the odds stacked against them, the staff at Willard R. Abbott Public School is determined to help their students succeed in life. Though these public servants may be outnumbered and underfunded, they love what they do — even if they don’t love the school district’s less-than-stellar attitude toward educating children. The teachers include Janine Teagues (Brunson), Gregory Eddie (Williams), Melissa Schemmenti (Walter), Jacob Hill (Perfetti), and Barbara Howard (Ralph). Ava Coleman (James) is the school’s inept principal, and Mr. Johnson (Davis) is the eccentric janitor.

For comparisons: Season one of Abbott Elementary on ABC averaged a 0.56 rating in the 18-49 demographic and 2.82 million viewers in the live+same day ratings.

What do you think? Do you like the Abbott Elementary TV series on ABC? Should it be cancelled or renewed for a third season?