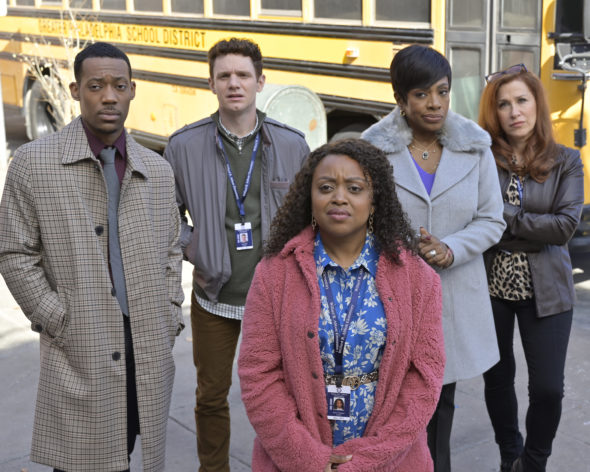 It looks like Abbott Elementary will be back in session for the 2022-23 season. ABC has renewed the comedy for a second season. The first season resumes next Tuesday night.

A workplace mockumentary series, the Abbott Elementary TV show stars series creator Quinta Brunson, Tyler James Williams, Janelle James, Chris Perfetti, Lisa Ann Walter, and Sheryl Lee Ralph. The story follows a group of dedicated, passionate teachers (as well as a slightly tone-deaf principal) as they navigate the Philadelphia public school system. Despite the odds stacked against them, they are determined to help their students succeed in life, and though these incredible public servants may be outnumbered and underfunded, they love what they do — even if they don’t love the school district’s less-than-stellar attitude toward educating children.

Airing on Tuesday nights, the first season of Abbott Elementary has averaged a 0.58 rating in the 18-49 demographic and 2.90 million viewers in the live+same day ratings (including DVR playback through 3:00 AM). In the live+7 day delayed ratings, the season is averaging a 0.85 in the demo and 3.90 million.

The renewal announcement came directly from the desk of the show’s principal:

What do you think? Have you enjoyed watching the Abbott Elementary TV series? Are you looking forward to watching season two of this ABC show?

Don’t watch the show. The ads for it looked so stupid. Honestly, their is not one single good sitcom on now. Hasn’t been for a long time. They are all “stupid sitcoms”. Gone are sitcoms like Friends, Cheers and Fraser. Now those were funny.

I’m honestly very pleased to hear that is getting renewed. It’s my favorite show on right now. I will say though that in my honest opinion there hasn’t been a single episode as funny as the first one so far. I do hope that the writing improves a bit but overall this is very good news.