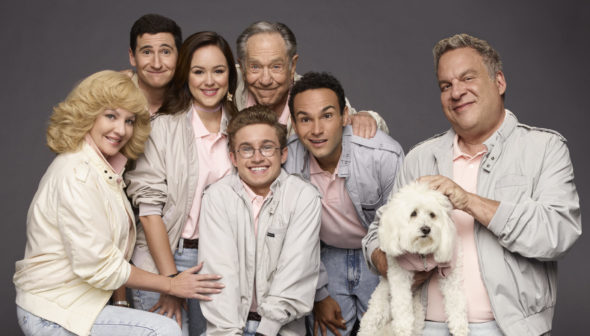 Count on Adam’s mom continuing to embarrass him in the 2021-22 television season. ABC has renewed The Goldbergs TV series for a ninth season.

A retro family sitcom, The Goldbergs stars Wendi McLendon-Covey, Sean Giambrone, Troy Gentile, Hayley Orrantia, Sam Lerner, Jeff Garlin, Patton Oswalt (voice), and the late George Segal. Set in Jenkintown, Pennsylvania and loosely based on the experiences of series creator Adam F. Goldberg, this comedy looks at life as seen by a young boy growing up in the Goldberg family in the 1980s. Youngest child Adam (Giambrone) is obsessed with movies and spends his time documenting his colorful family’s ups and downs. Mom Beverly (McLendon-Covey) loves to take care of her family and meddle in their lives while Dad Murray (Garlin) parents from the comfort of his recliner. Eldest child Erica (Orrantia) dreams of being a pop star if she can only overcome her secret love of all things uncool. Meanwhile, middle child Barry (Gentile) can be emotionally clueless and his best friend, Geoff “Madman” Schwartz (Lerner) dates Erica. Grandfather Al “Pops” Solomon (Segal) is the wild man of the clan and a shameless Don Juan who enjoys family time with his grandkids almost as much as his weekly massages.

The eighth season of The Goldbergs averages a 0.64 rating in the 18-49 demographic and 3.50 million viewers in the live+same day ratings. Compared to season 7, that’s down by 26% in the demo and down by 16% in viewership. The season finale airs next week.

What do you think? Are you a fan of The Goldbergs TV series? Will you be tuning in for the ninth season on ABC?

Renew for sure!! I love this show!! It makes me so happy to watch I wish I was able to watch it 7 days a week!!

I personally love the show! I get up on 3AM weekdays to watch reruns! So sad (Pops) George Segal passed away.

I am simply stunned that ABC would renew this totally made up garbage…This show has become so STUPID it’s not even funny in the least..Even though I did watch tonight’s season finale just to see what BS they would come up with and now we have the character Erica (he NEVER had a sister) going to marry that idiot Geoff, so for those of you who are not old enough to remember, basically I see them setting up next season for a modern version of “Joanie Loves Chachi” which was a spin off from Happy days…it sucked and was cancelled..Happy… Read more »

I honestly dont know why this show continues to stay on the air. I have never seen it, only can judge by previews that are shown. It .looks so stupid. I feel the same way about Blackish and Mixed-ish.
Is that what TV viewers like, is stupid?

You have never watched an episode an lad are going off 30 second previews to judge the show? Got it

I feel this show has run its course .I have watched, more re-runs now than the new ones

I’ll watch it if Laney is on it.

No, no,, no…characters go out of their way to create false dilemmas. (most recent being the whole Geoff and Erica breakup to resolve itself in the season finale)
Minimalist offenses are blown way of proportion and it always reconciles with an 80s song. Why would they cancel Schooled yet keep this infinite loop of college kids (that are really just long-haul commuters) having their problems reconciled by their parents? Is Adam going to NYU?–and yet he’ll be home every episode to keep this schlock going….

The reason schooled was canceled is simple the characters, people like the Goldberg’s because its about a family ! not individuals schooled tried to cram most of the same characters from Goldberg’s to the 90s.. A great cast will propel a show a long way,lets have Laney ,come back to the show and the last episode should be a double wedding ! Geoffery wedds Erica barry marries laney..And Adam gets engaged and becomes a big time director.
That would make the show a success…we all need positive tv to watch.

You can’t be any more correct than that you are

When “Let My Love Open the Door” aired at the end of last night’s episode, my jets began to cool. That was the same song when Geoff and Erica first became a couple, a nice touch to say the least. If Schooled were kept going both series FINALES could have aired with Geoff and Erica capping The Goldbergs while Barry and Lainey would get hitched in Schooled, all with having Adam completing his undergrad degree in the 90s.

They took the smart approach with this show by beginning every episode with the date and “198-something” so they can make it an 80s retro plot without running out of years. Even so, I suspect nine seasons will probably be their limit, so the new season will probably be written as such. When all three kids are out of high school, grandpa is now sadly gone, and they have pretty much covered every piece of 80s nostalgia, it’s probably a good time to plan the exit. Before the show loses all identity – like the last few seasons of “Happy… Read more »

Totally agree with you but let keep it continue love this show so funny look forward every Wednesday family together enjoy it and love it worth watching. My opinion hasn’t change just older characters and actors Adam, Berry, Erica love them too much.

Look forward every Wednesday night comedy love it and enjoy it so funny never missed any of it.