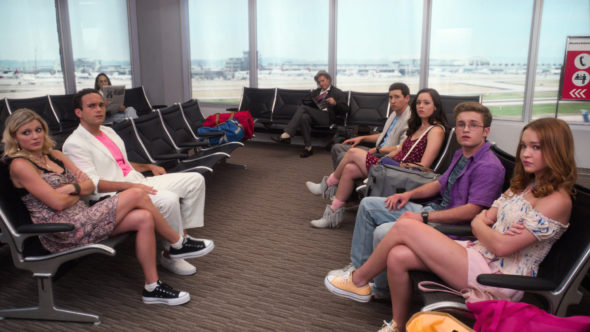 Has this retro comedy series gone out of style? Has The Goldbergs TV show been cancelled or renewed for a ninth season on ABC? The television vulture is watching all the latest cancellation and renewal news, so this page is the place to track the status of The Goldbergs, season nine. Bookmark it, or subscribe for the latest updates. Remember, the television vulture is watching your shows. Are you?

Airing on the ABC television network, The Goldbergs is a family sitcom which stars Wendi McLendon-Covey, Sean Giambrone, Troy Gentile, Hayley Orrantia, Sam Lerner, George Segal, Jeff Garlin, and Patton Oswalt (voice). Set in Jenkintown, Pennsylvania and loosely based on the experiences of series creator Adam F. Goldberg, this comedy looks at life as seen by a young boy growing up in the Goldberg family in the 1980s. Youngest child Adam (Giambrone) is obsessed with movies and spends his time documenting his colorful family’s ups and downs. Mom Beverly (McLendon-Covey) loves to take care of her family and meddle in their lives while Dad Murray (Garlin) parents from the comfort of his recliner. Eldest child Erica (Orrantia) dreams of being a pop star if she can only overcome her secret love of all things uncool. Meanwhile, middle child Barry (Gentile) can be emotionally clueless and his best friend, Geoff “Madman” Schwartz (Lerner) dates Erica. Grandfather Al “Pops” Solomon (Segal) is the wild man of the clan and a shameless Don Juan who enjoys family time with his grandkids almost as much as his weekly massages.

The eighth season of The Goldbergs averaged a 0.64 rating in the 18-49 demographic and 3.48 million viewers. Compared to season 7, that’s down by 26% in the demo and down by 16% in viewership. Find out how The Goldbergs stacks up against other ABC TV shows.

Will ABC cancel or renew The Goldbergs for season nine? My inclination is that this comedy will be renewed because it’s still one of ABC’s top-rated sitcoms. Still, all shows have to end sometime, especially ones that feature kids in main roles. Offhand, I suspect that season nine or season 10 will be the end. I’ll update this page with breaking developments. Subscribe for free alerts on The Goldbergs cancellation or renewal news.

5/14/21 update: The Goldbergs has been renewed for a ninth season on ABC.

What do you think? Are you glad that The Goldbergs TV show has been renewed for a ninth season? How would you feel if ABC had cancelled this TV series, instead?

Yes it needs to be renewed!

Please boost your ratings look forward The Goldbergs so funny my opinion really enjoy it and love it watch with my family never missed any episodes. Please renewed another season.

Although I love the show, I think the death of Segal will end the show. The show is kind of at a stopping point with Adam graduating and going to NYU and people are heading their separate ways. Now with the loss of the soul and backbone of the show. I’d rather it end here (at end of season) than jump the shark.

Best comedy on tv …. by far …gives me many laugh out loud moments each week ….will miss George Segal and his one liners with Murray

This is the only show I look forward to watching. Please continue.

Completely relatable! My whole family laughs out loud to this show. Please renew for a 9th season!

I would like the goldbergs to go for a couple more years … my family enjoys a clean show for a change !

Love this show worth watching every episode and week too please boost ratings too.

Just watched the first part of tonight’s episode about some murder mystery plot….half way through I changed the channel to the news which is actually more entertaining than this absolutely STUPID episode/show….It has all become so made up that they have not had a show based on that left over collection of VHS tapes the so called creator has….the ratings are sinking like a ship + there is NO way it can be worth it for ABC to keep paying millions of dollars per episode, and then be happy with the crappy ratings….Time to move on & the multiple creators… Read more »

Please renewed another season so funny love it the best.