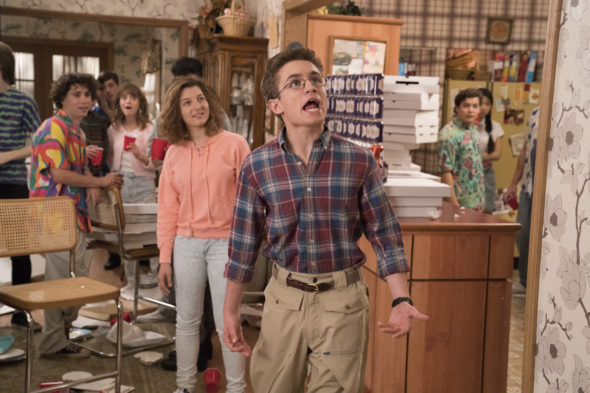 Is big hair a thing of the past? Has The Goldbergs TV show been cancelled or renewed for a seventh season on ABC? The television vulture is watching all the latest cancellation and renewal news, so this page is the place to track the status of The Goldbergs, season seven. Bookmark it, or subscribe for the latest updates. Remember, the television vulture is watching your shows. Are you?

The sixth season of The Goldbergs averaged a 1.18 rating in the 18-49 demographic and 4.91 million viewers. Compared to season five, that’s down by 18% and 12%, respectively. Find out how The Goldbergs stacks up against other ABC TV shows.

Will ABC cancel or renew The Goldbergs for season seven? I’m confidant that this series will be renewed, especially now that the series has gone into syndication. I’ll update this page with breaking developments. Subscribe for free alerts on The Goldbergs cancellation or renewal news.

5/11/19 update: ABC has renewed The Goldbergs TV show for a seventh season.

What do you think? Are you glad that The Goldbergs TV show has been renewed for a sixth season? How would you feel if ABC had cancelled this TV series, instead?

The Goldberg’s is the greatest show ever!

If you had a chance to watch leave it to beaver ..the brady bunch..fathers knows best..or hazel you’d see they all were cancelled prematurely NOT SOON ENOUGH!

The Goldbergs is the greatest thing since The Wonder Years, only BETTER. However, seeing the new spinoff show sounds not so interesting . What they NEED TO DO INSTEAD for a spinoff is a show about Adam and his wife in later years with THEIR KIDS. Now THAT would be a jewel and a half! GOTTA KEEP BEVERLY’S CHARACTER VITAL in my better version of a spinoff. NO ONE IS GOING TO BE THAT INTERSTED in following any story of the girl teacher and the school stuff. FORGET IT! I rate that a PRE-CANCELLED SHOW.

D.farsh
Reply to  Shawn and Mya

I think the Goldbergs is one of the best
Comedy shows on TV today. Please don’t
Cancel this wonderful, funny, heartwarming
Show.