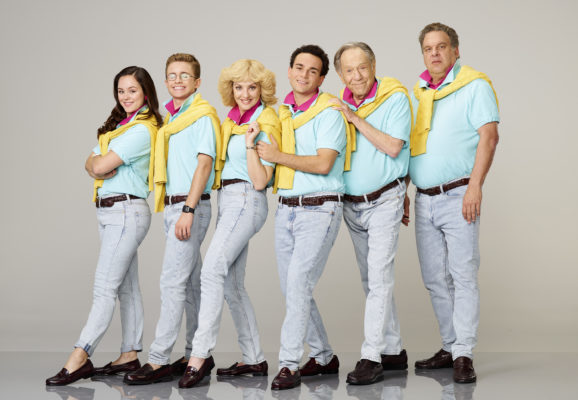 Does the sixth season of The Goldbergs TV show on ABC deflate or puff up your shoulder pads? As we all know, the Nielsen ratings typically play a radical role in determining whether a TV show like The Goldbergs is cancelled or renewed for season seven. Unfortunately, most of us do not live in clutch Nielsen households. Because many viewers feel burned when their choice viewing habits and opinions aren’t considered, we’d like to offer you the chance to rate all The Goldbergs season six episodes for us here. *Status update below.

What do you think? Which season six episodes of The Goldbergs TV series do you rate as wicked good, trippin’, or somewhere between? Should ABC cancel or renew The Goldbergs  for a seventh season? Don’t forget to vote, and share your thoughts, below.

*5/11/19 update: ABC has renewed The Goldbergs TV show for a seventh season.

I really hope this show comes back for season 7. I love the show, love the characters, and love the actors who play the adorable characters! This is original and fantastic!!

I really appreciate this humorous and even thoughtful 80’s family series. Many of the interests of Adam and Erica remind me of my fascination with Star Wars and the desire to write and perform music. They need to keep this fantastic family series on the air!!

We love the Goldbergs!!! Anytime. Any channel. Please renew.