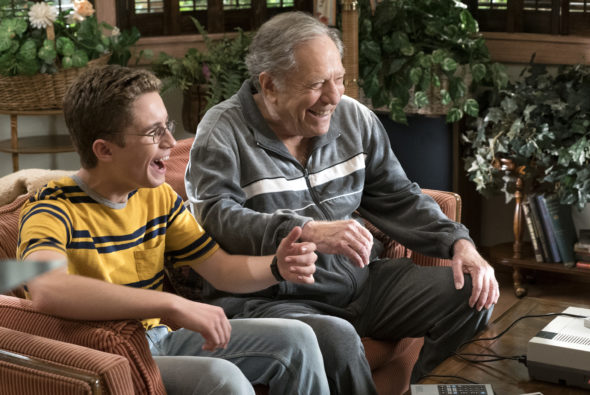 Is the fifth season of The Goldbergs TV show on ABC totally tubular or grody to the max? As we all know, the Nielsen ratings typically play a radical role in determining whether the righteous TV show The Goldbergs is cancelled or renewed for season six. Unfortunately, most of us do not live in clutch Nielsen households. Because many viewers feel burned when their choice viewing habits and opinions aren’t considered, we’d like to offer you the chance to rate all the season five episodes of The Goldbergs for us here.

An ABC 1980s sitcom, The Goldbergs stars Hayley Orrantia, Troy Gentile, Sean Giambrone, Wendi McLendon-Covey, Sam Lerner, Patton Oswalt (narrator), and AJ Michalka, with George Segal and Jeff Garlin. The 1980s period comedy centers on a family from Jenkintown, Pennsylvania. Youngest son Adam (Giambrone) videotapes his family’s craziness and provides commentary as an adult (Oswalt). In season five, the siblings struggle with huggies, snuggies and nubbies, as they learn what it means to grow up as a Goldberg.

What do you think? Which season five episodes of The Goldbergs TV series do you rate as wicked good, trippin’, or somewhere between? Are you stoked ABC already renewed The Goldbergs  for a sixth season? Don’t forget to vote, and share your thoughts, below.

Best show in the world!!!

I love this show! I would love to see it renewed for a few more seasons and show how the kids do in college and their careers.

Don’t let it go, it’s great! Lighthearted, we need it!

I think this is an adorable FUNNY show!…please keep.

thumb Down hate it