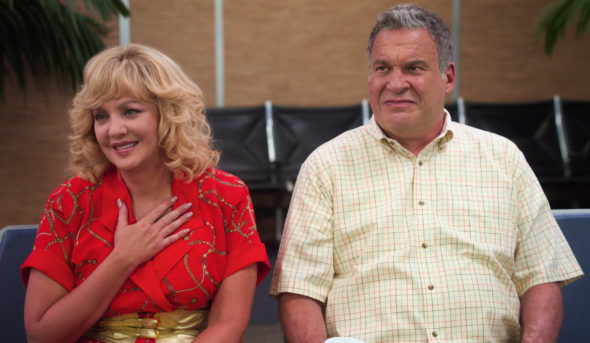 Is the eighth season of The Goldbergs TV show totally tubular or grody to the max? As we all know, the Nielsen ratings typically play a big role in determining whether a TV show like The Goldbergs is cancelled or renewed for season nine. Unfortunately, most of us do not live in Nielsen households. Because many viewers feel frustration when their viewing habits and opinions aren’t considered, we invite you to rate all of the eighth season episodes of The Goldbergs here.  *Status Update Below.

An ABC retro family sitcom, The Goldbergs stars Wendi McLendon-Covey, Sean Giambrone, Troy Gentile, Hayley Orrantia, Sam Lerner, George Segal, Jeff Garlin, and Patton Oswalt (voice). Set in Jenkintown, Pennsylvania and loosely based on the experiences of series creator Adam F. Goldberg, this comedy looks at life as seen by a young boy growing up in the Goldberg family in the 1980s. Youngest child Adam (Giambrone) is obsessed with movies and spends his time documenting his colorful family’s ups and downs. Mom Beverly (McLendon-Covey) loves to take care of her family and meddle in their lives while Dad Murray (Garlin) parents from the comfort of his recliner. Eldest child Erica (Orrantia) dreams of being a pop star if she can only overcome her secret love of all things uncool. Meanwhile, middle child Barry (Gentile) can be emotionally clueless and his best friend, Geoff “Madman” Schwartz (Lerner) dates Erica. Grandfather Al “Pops” Solomon (Segal) is the wild man of the clan and a shameless Don Juan who enjoys family time with his grandkids almost as much as his weekly massages.

What do you think? Which season eight episodes of The Goldbergs TV series do you rate as wonderful, terrible, or somewhere between? Do you think that The Goldbergs should be cancelled or renewed for a ninth season on ABC? Don’t forget to vote, and share your thoughts, below.

*5/14/21 update: The Goldbergs has been renewed for a ninth season on ABC.

RIP Mr. Segal, and now that he is gone and can NOT be replaced, like I have stated below before his death, this show is DONE…Move on ABC, you can do better….I will never watch this show again as it is all to FAKE for me now….Pop’s was the real heart of this show, as kid actors are a “dime a dozen” and once this show is over you will never hear from any of them again…My gosh, even Seinfeld one of the most popular TV shows in history, knew when to hang it up and it is a million… Read more »

Being a kid in the 80’s, I love reminiscing the events they mention.
I hope with the passing of George Segal they can continue, but I don’t think they should.
It won’t be the same without “Pops”.

Please boost ratings so good make us laugh every week so good.

Goldberg’s should be picked up for at least two more seasons , such a great family good feeling show . It reminds me of the “Brady Bunch” . The first 20 minutes of Episode is chaos then all negative things are solved and everyone loves each other. Always a good message at the end of the Episode!

WOW….just checked the ratings for this weeks show about racism, which was totally NOT believable, and they took a HUGE nosedive…so a show based on “Adam F. Goldberg” who only cares about stupid movies & puppets all of a sudden cares about real world problems back when he was a little kid in the 80’s….NO way that plot line was even close to any kind of reality…more likely ABC just made it all up to be politically correct due to the current climate of this country…for a show that cost around 3.5 million dollars per episode, what a sad waste… Read more »

I watch the older ones…..a lot of shows try to push it, it doesn’t work anymore. Let go