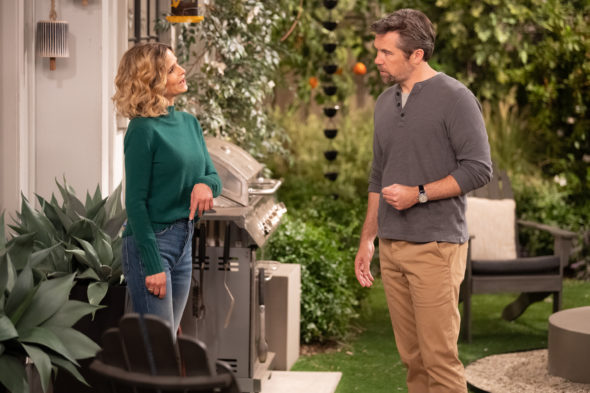 Will Jean and her kids find the right balance in the first season of the Call Your Mother TV show on ABC? As we all know, the Nielsen ratings typically play a big role in determining whether a TV show like Call Your Mother is cancelled or renewed for season two. Unfortunately, most of us do not live in Nielsen households. Because many viewers feel frustrated when their viewing habits and opinions aren’t considered, we invite you to rate all of the first season episodes of Call Your Mother here. *Status Update Below.

An ABC multi-camera sitcom, the Call Your Mother TV show stars Kyra Sedgwick, Rachel Sennott, Joey Bragg, Emma Caymares, Austin Crute, Patrick Brammall. The story begins with Jean Raines (Sedgwick), a mother from Iowa with two adult children — Freddie (Bragg) and Jackie (Sinnott) — who have moved away to start lives of their own 2,000 miles away. She misses being an integral part of their lives and, when she doesn’t hear from them, hops on a plane to Los Angeles to make sure that they’re okay. A fish-out-of-water in LA, Jean rents a guest house from newly-divorced therapist Danny (Brammall). She soon realizes that her kids could still use her help so Jean decides to stick around.

What do you think? Which season one episodes of the Call Your Mother TV series do you rate as wonderful, terrible, or somewhere between? Do you think that Call Your Mother should be cancelled or renewed for a second season on ABC? Don’t forget to vote, and share your thoughts, below.

*5/14/21 update: Call Your Mother has been cancelled by ABC so there won’t be a second season.

I love this show!!! Please bring it back.

I love this show!!! Please bring it back!

Not a bad show compared to the other shows on the tube. I would have watched a season two…if there was one.

I love this new sitcom. It’s fun. Please I hope it gets a season two! Fingers crossed

I like the idea of the show and think Kyra Sedgwick is perfect in the role. Do wish the writers would not have some of the silly episodes and not try to force so many laughs in every episode. I do hope it is renewed for a second season and maybe work on writers to mature their scripts a bit!

I hope it gets a season 2. I’m actually liking it. It’s fun

I wasn’t sure about this show, but the more i watch, the more i enjoy it, although they need to make it less scattered. Sometimes you just aren’t sure what story is involving who, but if the writers got their acts together, they could make this much better. It’s still much better than so much of the crap that is on now. I like it and will continue to watch.

I agree… this was so unfunny. We not only didn’t laugh, we didn’t even smile. What happened to the fantastic woman who was THE CLOSER? These writers should all be fired.

I was excited to see a new light hearted show trying to escape politics. Also was excited to see the rating was TV PG, then sadly disappointed that with the first few minutes the amazing mom character is calling someone a “Dick” at the airport. Hmm that’s not PG in my book. I have raised 6 kids to adulthood and now have grandkids and I would never say that out loud. Too bad writers can’t know what REAL suburban moms talk like. So another sitcom I can’t watch in front of kids and it’s not funny enough to watch during… Read more »

All fairness, a lot of shows are using these derogatory remarks. This is nothing new other networks are worse than this. At least it’s better than some junk get on the other networks