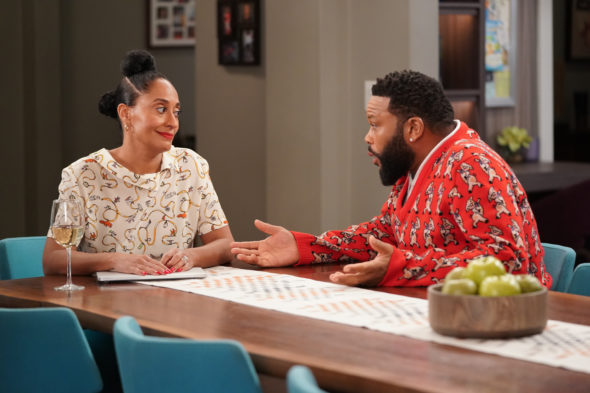 A day after ABC released its Fall 2020 schedule, the network has already made a change. Black-ish was going to be held until mid-season but will now return this fall for the sitcom’s seventh season. New comedy Call Your Mother has been shifted to mid-season.

Here’s ABC’s press release about the schedule change, as well as some information about Call Your Mother:

“’black-ish’ has a long-standing history of shining a light on current events and honoring Black voices through the lens of the Johnson family,” said Karey Burke, president, ABC Entertainment. “After speaking with Kenya and our creative partners, we decided it was important to tell these meaningful stories during this moment in time, so we are adjusting our premiere schedule and are committed to doing whatever it takes to bring this series back as soon as we possibly can. Following recent monumental events, it’s imperative that the dialogue continues and empowers viewers to raise their voices, and there is no other show that does that like ‘black-ish.’”

“We are incredibly grateful to Karey, Dana and Peter for recognizing the importance of ‘black-ish’ in this moment and applaud them for making the necessary shifts to bring the show back as soon as possible,” said Kenya Barris. “While the last few months have felt overwhelming at times, they have also underscored just how important it is that Black voices are not only heard but empowered and amplified as well; and our entire ‘black-ish’ team is humbled to be a small part of telling our stories and are excited to get back to these conversations.”

Additional pickups and schedule information (including specific premiere dates) to be announced soon.

Call Your Mother
From Kari Lizer (“The New Adventures of Old Christine”), this multicamera comedy follows an empty nester mom who wonders how she ended up alone while her children live their best lives thousands of miles away. She decides her place is with her family and as she reinserts herself into their lives, her kids realize they might actually need her more than they thought. “Call Your Mother” is produced by Sony Pictures Television & ABC Studios. ABC Studios is a part of Disney Television Studios, alongside 20th Century Fox Television and Fox 21 Television Studios.

What do you think? Are you a fan of the Black-ish series? Will you be watching this sitcom in the fall? Do you plan to check out Call Your Mother when it debuts?

I love Blackish and I am glad that I don’t need to wait until the midseason before I get to see the show. I hope and pray that Call Your Mother will be worth the wait. I must agree with Valerie L. Lucas handle relevant issues

I love Blackish, the program deals with revelant issues.

We have seen Blackish every day on different channels! Please do not switch air times with Call Your Mother! We want to see it soon and let Blackish begin in mid-season!!!! Please change back!