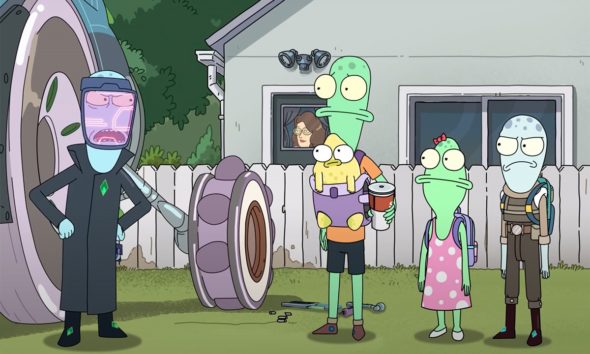 Hulu thinks their Solar Opposites TV show is out of this world. The animated comedy series, which debuted on May 8th, is reportedly the streaming service’s most-watched premiere to date. Hulu ordered two seasons of Solar Opposites right of the gate and has now renewed the series for a third season.

Here are some additional details about the renewal, as well as a video announcement:

As the home to the largest streaming TV library of Adult Animation, Hulu continues to infuse fresh new content into the genre. By renewing Crossing Swords and Solar Opposites, Hulu is expanding its curated collection of adult animated series, including award-winning hits like Family Guy, Bob’s Burgers, Rick and Morty, Futurama and King of the Hill. The category is a high-driver of engagement on Hulu and currently holds the highest average re-watch rate on the service – further fueling Adult Animation fandom.

· On May 8, Solar Opposites debuted as Hulu’s most-watched Original comedy premiere to date and was Certified Fresh by Rotten Tomatoes.

· Logline: Solar Opposites centers around a team of four aliens who escape their exploding home world only to crash land into a move-in ready home in suburban America. They are evenly split on whether Earth is awful or awesome. Korvo (Justin Roiland) and Yumyulack (Sean Giambrone) only see the pollution, crass consumerism, and human frailty while Terry (Thomas Middleditch) and Jesse (Mary Mack) love humans and all their TV, junk food and fun stuff. Their mission: protect the Pupa, a living super computer that will one day evolve into its true form, consume them and terraform the Earth.

What do you think? Have you watched the Solar Opposites TV series? Do you plan to watch seasons two and three?

Have just finished watching it and whilst I like to see more of these animated shows aimed at adults, this one didn’t quite hit the mark.

It had all the right elements but something just didn’t spark for me.