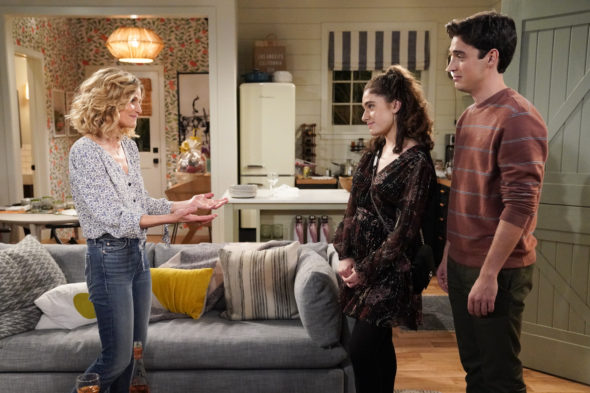 Will the kids want to send mom back to Iowa? Has the Call Your Mother TV show been cancelled or renewed for a second season on ABC? The television vulture is watching all the latest cancellation and renewal news, so this page is the place to track the status of Call Your Mother, season two. Bookmark it, or subscribe for the latest updates. Remember, the television vulture is watching your shows. Are you?

Airing on the ABC television network, the Call Your Mother TV show stars Kyra Sedgwick, Rachel Sennott, Joey Bragg, Emma Caymares, Austin Crute, Patrick Brammall. The story begins with Jean Raines (Sedgwick), a mother from Iowa with two adult children — Freddie (Bragg) and Jackie (Sinnott) — who have moved away to start lives of their own 2,000 miles away. She misses being an integral part of their lives and, when she doesn’t hear from them, hops on a plane to Los Angeles to make sure that they’re okay. A fish-out-of-water in LA, Jean rents a guest house from newly-divorced therapist Danny (Brammall). She and her kids soon realize that they still need each other so Jean decides to stick around.

Will ABC cancel or renew Call Your Mother for season two? Sedgwick is best known for her dramatic work but does have comedy experience. The ratings have been pretty dismal at times so I’m thinking this struggling series will be cancelled. I’ll update this page with breaking developments. Subscribe for free alerts on Call Your Mother cancellation or renewal news.

5/14/21 update: Call Your Mother has been cancelled by ABC so there won’t be a second season.

What do you think? Were you hoping that the Call Your Mother TV show would be renewed for a second season? Are you sorry that ABC cancelled this TV series, instead?

I really liked the show and the cast. I hope they will reconsider and bring it.

what is wrong with the sitcom “CALL YOUR MOTHER” nothing. but I’ll tell you whst something is wrong with fhe network who cancelled it. it was a good show.

This is the worst show I have ever watched. Terrible writing. Doesn’t even make any sense. Just awful.

I love Kyra Sedgwick but this show sucks so bad!! I gave it a chance, more than one. It needs to be canceled it’s an embarrassment.. Painful to watch. Sorry Kyra. Stop taking off amazing shows and replacing them with crap!! I don’t care how popular the actor is if the sitcom is s*** it is still going to be s***

Please cancel, its just bad. Bring back Bless this mess, that was a good show.

At first I wasn’t sure. So used to Kyra in a non comedic role but the show keeps getting better. I loved episode 11 and hope it gets renewed

It’s a horrible show. I love Kyra Sedgwick but this show stinks. Bad writing and even worse acting. She can’t save this show and her daughter??? Bad actress.

I really wanted to like this show. I love Kyra Sedgwick and her character is endearing. She just not funny. It feels like she’s trying too hard. The supporting cast is better than the main 3 family members. I kept watching and kept watching but finally gave up and “missed” the last episode. It’s just not funny!

I agree. Seemed like she was trying too hard to get out the laugh line….and failed. I liked her much better on The Closer and with the southern accent it was perfect.

I wouldn’t say that just because Kyra is on it the show will get automatically renewed. Remember her other god awful show on ABC 10 days in the Valley? Did they even finish showing that? I believe ratings were similar.

Yes it is a great show a good family show which is hard to find these days!!! Please keep it
And renew!

Why oh why would Kyra agree to be a part of this awful show?

Call your mother is a really good show!! I don’t understand seeing people put it down maybe they didn’t sit actually watch the whole episode each time? It’s put together well so far it’s a good family show which these days is hard to find without all the other garbage in it. There are so many dating shows and Reality TV I barely watch TV because of all this other crap. CALL YOUR MOTHER is a breath of fresh air just like MAN WITH A PLAN which I wish were still on.

I totally agree I love Kyra but this show is painful to watch it’s so awful.