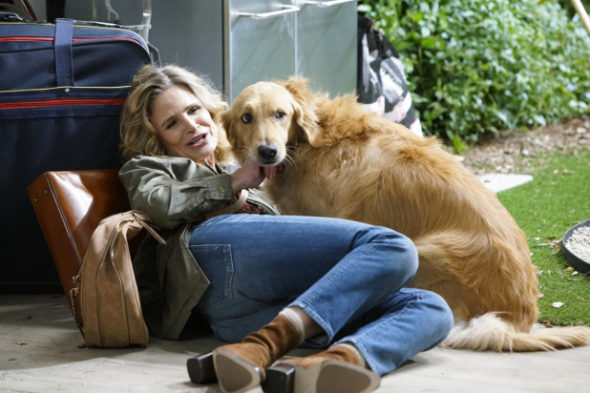 Jean’s kids may still need her and but ABC doesn’t want Call Your Mother for the 2021-22 season. The alphabet network has cancelled the freshman comedy series so there won’t be a second year.

A multi-camera sitcom, the Call Your Mother TV show stars Kyra Sedgwick, Rachel Sennott, Joey Bragg, Emma Caymares, Austin Crute, Patrick Brammall. The story begins with Jean Raines (Sedgwick), a mother from Iowa with two adult children — Freddie (Bragg) and Jackie (Sinnott) — who have moved away to start lives of their own 2,000 miles away. She misses being an integral part of their lives and, when she doesn’t hear from them, hops on a plane to Los Angeles to make sure that they’re okay. A fish-out-of-water in LA, Jean rents a guest house from newly-divorced therapist Danny (Brammall). She and her kids soon realize that they still need each other so Jean decides to stick around.

Airing on Wednesday nights, the first season of Call Your Mother averages a 0.38 rating in the 18-49 demographic and 2.51 million viewers. It’s ABC’s lowest-rated freshman scripted series in the demo and viewership this season.

Sedwick broke the news to her followers about the cancellation.

What do you think? Do you enjoy the Call Your Mother comedy series? Are you sorry to hear that it’s been cancelled? Were you looking forward to watching the second season?

Kyra Sedgwick need her own tv show as an attorney!!!

This was the best sitcom they have come up with in 5 years big mistake canceling it. So tired of these networks canceling all the good shows and keeping all the junk on TV

So sad Call Your Mother was cancelled. It was a nice change for Kyra. I enjoyed the show very much!

Truly a terrible show! Not funny at all and all the characters were so whiny and irritating. I thought Kyra would made a better choice in shows!

Not surprised at all. We both love Keira but boy was this show awful. Can’t believe she agreed to be in it. Not her fault, it was the writers!

no surprise… i couldn’t get through half the first episode. hard to understand how such a cliche ridden and corny show lasted to a 2nd episode.

I only saw the first episode. Didn’t really care for it. I hope everyone can find more work though.

I’m sorry. This one I could see coming. Not surprised, or upset.

Another show I like is canceled by ABC…. I’m not surprised just disappointed!!!‍♀️