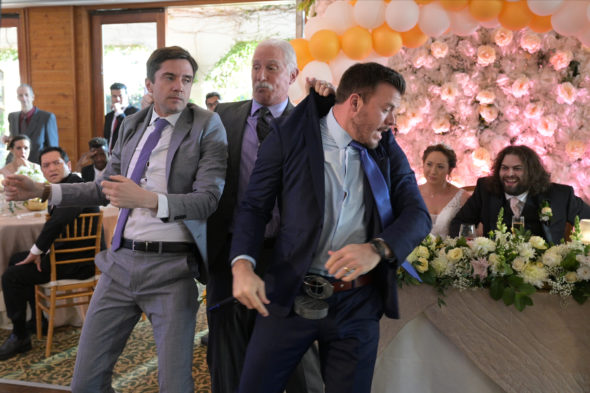 How will the siblings’ lives change in the first season of the Home Economics TV show on ABC? As we all know, the Nielsen ratings typically play a big role in determining whether a TV show like Home Economics is cancelled or renewed for season two. Unfortunately, most of us do not live in Nielsen households. Because many viewers feel frustrated when their viewing habits and opinions aren’t considered, we invite you to rate all of the first season episodes of Home Economics here.  *Status Update Below.

An ABC family comedy series,  Home Economics stars Topher Grace, Caitlin McGee, Jimmy Tatro, Karla Souza, Sasheer Zamata, Shiloh Bearman, Jordyn Curet, Chloe Jo Rountree, and JeCobi Swain. The show takes a look at the heartwarming yet super-uncomfortable and sometimes frustrating relationship among three adult siblings of the Hayworth family. Connor (Tatro) is the youngest and most successful sibling of the family. He runs his own private equity firm and his marriage is falling apart. He has a daughter named Gretchen (Bearman). Tom (Grace) is the middle sibling and is a middle-class author who is struggling. He is married to Marina (Souza), a former attorney, and they have three kids. Sarah (McGee) is the eldest sibling and an out-of-work child therapist who’s barely making ends meet. She is married to Denise (Zamata), a teacher, and they have two kids and live in a cramped Bay Area loft.

What do you think? Which season one episodes of the Home Economics TV series do you rate as wonderful, terrible, or somewhere between? Do you think that Home Economics should be cancelled or renewed for a second season on ABC? Don’t forget to vote, and share your thoughts, below.

*5/14/21 update: Home Economics has been renewed for a second season on ABC.

This show has great appeal to families and needs to come back. It’s very entertaining. The characters really have chemistry and feel like family! Just Love it!

I think it’s really funny! And I want one of those mini cars to ride on! I like the characters. Each sibling is totally different and represents a segment of society. It makes fun of everyone. That’s why it’s funny!

This is such a relatable show, can’t wait until Wednesday every week. Best show of the year and we are all hoping for a second season and many more to follow. The casting is just Great! We love Topher Grace and all the stars and the writer is amazing!

It looked like it was going to be one of those lame shows that might last 2 episodes but I thought it was pretty funny! I want to see more episodes!!

SUCKED. Not one likeable character in the show. No sympathy, as two of the three have more children than they can handle and all live outside their means. Should all have a show about a gofundme me page, as that is how this generation gets by when in this situation. Didn’t find any of it funny and that’s the point.