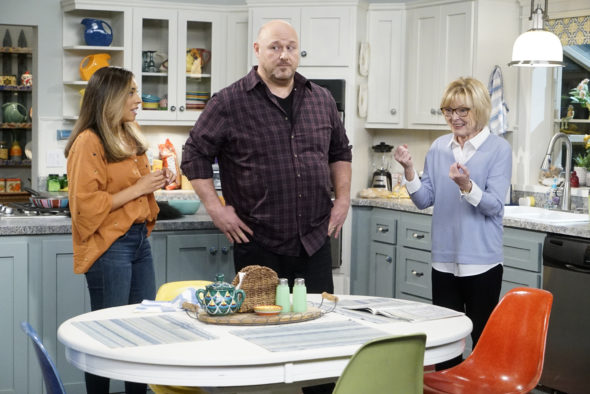 Is there family harmony in the first season of the United We Fall TV show on ABC? As we all know, the Nielsen ratings typically play a big role in determining whether a TV show like United We Fall is cancelled or renewed for season two. Unfortunately, most of us do not live in Nielsen households. Because many viewers feel frustration when their viewing habits and opinions aren’t considered, we invite you to rate all of the first season episodes of United We Fall here. Status Update Below.

An ABC family situation comedy, the United We Fall TV show stars Will Sasso, Christina Vidal Mitchell, Jane Curtin, Guillermo Diaz, Ella Grace Helton, and Ireland and Sedona Carjaval. The series revolves around the trials and tribulations of Bill (Sasso) and Jo (Mitchell) as they try to make it day-to-day as a functioning family. They’re the parents of two young kids, Emily (Helton) and Lulu (Carjaval). Bill’s very judgmental live-in-mother, Sandy (Curtin), and Jo’s large Latinx Catholic family — including brother Chuy (Diaz) — never hesitate to let this couple know they’re seemingly screwing up, but Bill and Jo will always have each other’s backs.

What do you think? Which season one episodes of the United We Fall TV series do you rate as wonderful, terrible, or somewhere between? Do you think that United We Fall should be cancelled or renewed for a second season on ABC? Don’t forget to vote, and share your thoughts, below.

So sad to hear this was cancelled, cute,funny show that we need now.

I love this series the pilot was so funny. And the biter was great. Those two episodes remind me of my family. Keep it going. Don’t cancel. Give it a chance. Everyone has their own views.

I liked it. You didn’t have to think to hard, but given everything that is going on right now it was what I needed. To a large degree it was very similar to some of the insanity I went thru raising my daughter. I didn’t have a partner to bounce off of once my daughter got to be about 7, but it was relatable. Please keep it on and give it a chance to build a following.

so I really enjoyed the show it was quite predictable. But really cute. I don’t usually care for this kind of comedy and most of the kinds I Like are canceled. Never liked most popular shows…Big Bang theory…dumb…Young Sheldon fabulous….

Couldn’t get through the pilot. Not funny at all. The older child has some potential but not enough for me to watch.

Really kept wanting to like it but found it lame

Quite possibly the worst show I’ve ever seen.

wasnt completely bad, jokes are a little forced, like will sasso, dont care for the “brother in law” , seems more like little sketches than a comedy, WAY to many commercials as well, hopefully we get to see all the taped episodes at least, PLEASE LEAVE THIS ON INSTEAD OF MORE GAME/REALITY/COMPETITION/DATING/SINGING ETC. SHOWS

Show has potential… BUT way too many commercials 10 minute program 20 minutes of commercials !

I like the show . my only problem is the Chuy guy.. I just think he ruins the show…sorry… I DO HOPE IT’S RENEWED