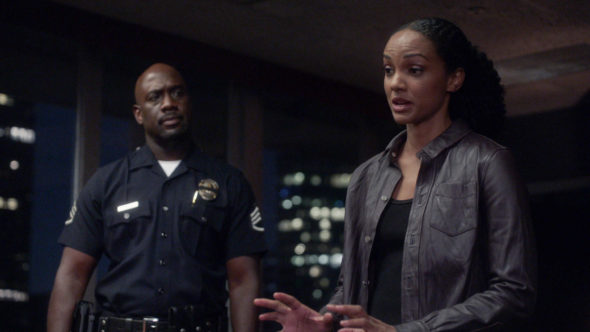 Can John handle what’s to come in the third season of The Rookie TV show on ABC? As we all know, the Nielsen ratings typically play a big role in determining whether a TV show like The Rookie is cancelled or renewed for season four. Unfortunately, most of us do not live in Nielsen households. Because many viewers feel frustrated when their viewing habits and opinions aren’t considered, we invite you to rate all of the third season episodes of The Rookie here.  *Status Update Below.

An ABC police drama series, The Rookie TV show stars Nathan Fillion, Alyssa Diaz, Richard T. Jones, Titus Makin Jr., Melissa O’Neil, and Eric Winter. The series follows the experiences of John Nolan (Fillion), a middle-aged divorced man from Pennsylvania. He owns a construction company but decides to give up his old life to pursue a new career as a police officer in the Los Angeles Police Department. He graduates from the Police Academy and becomes the oldest rookie on the force. He works with Sergeant Wade Grey (Jones), training officers Angela Lopez (Diaz) and Tim Bradford (Winter), and fellow rookies Jackson West (Makin Jr.) and Lucy Chen (O’Neil). As season three begins, John nears the end of his training and must come to terms with the choices he made in pursuit of the truth.

What do you think? Which season three episodes of The Rookie TV series do you rate as wonderful, terrible, or somewhere between? Do you think that The Rookie should be cancelled or renewed for a fourth season on ABC? Don’t forget to vote, and share your thoughts, below.

This show is great and one that I watch regularly and look forward to this show every week! It is funny, dramatic and suspenseful all in one. The cast is great and storylines are solid…Please do not cancel this!

I don’t watch TV. I watch this program on Hulu. I think it does a good job showing the surface of the. Problems for rookies. I care about the characters and look forward to the next episodes. Please don’t cancel.

Police that are pregnant shouldn’t be doing active duty.
Too dangerous for the baby and the mother

My husband and I look forward to The Rookie every week. The show lets the viewer see what it’s really like, from the point of a policeman, to patrol the streets of LA. Their split-second decisions can mean life or death to a person of interest or a perp. It’s opened my eyes to what it’s like for them. The gallows humor, so well delivered by all of them, but especially by Fillion, strikes me as realistic. His age often shows the wisdom of having lived a few more years than the other rookies; his decisions are often based on… Read more »

One more family friendly show in trouble. The last good family friendly show was eureka. There are other shows, but too much drama and too depressing. Right now I need this. I need a break from all of the politics. I.e, reality. I love the characters and actresses and actors. Love the music and the theme song. Seeing this happen again after eureka, I’m losing faith again in networks. I started paying 67.00$ a month on a streaming service just to watch this show. I’m on social security with a budget. Please. I beg you. At least have the season… Read more »

The 4/18/21 show was excellent but the background music was very irritating. Most of the time I couldn’t hear the dialogue 0f the actors. It didn’t even sound like music – TO MUCH PLEASE STOP.

I loved the Rookie and Nathan Fillion, but this “woke” wave of episodes in season 3 has really dragged it down in enjoyment and entertainment value. The whole reason I watched the show was escapism and for a laugh, this new preachy woke path it is following isn’t why I tuned in. I don’t want to waste my free time being preached at and being told how bad everyone is. So I’m not tuning in anymore and I hate to say it.

I think the predominantly female writers and producers are becoming to woke, sexist and irritating. As a guy I’m switching off.

I also like the show and enjoy the characters. Last night I watched show”True crime” and I think it was terrible. Switching back and forth and no plot. Hope next weeks show is better.

I love the show, but Sunday nights show was awful. Just curious, does that writer still have a job?

I always enjoy Nathan Fillion. I never miss an episode. I am having a hard time relating to his character’s new TO. I’m hanging in there with her for now.

We are big fans of Nathan Fillion. We’ve enjoyed him in just about everything he has done. But The Rookie has gotten so politically correct that we just can’t watch it anymore. The classroom scene where he has anxiety about identifying himself as a policeman and the attacks he received immediately upon the revelation were stupid and pandering. Finally, when the teacher said “you have a lot to make up for,” I turned it off. I doubt we’ll be turning it back on.

You don’t have to agree with the political climate, but believe me it is close to being accurate in it’s depiction, whether I like it or not. If I’m looking to escape I can always watch reruns of “Firefly”

I don’t get the negative crap from some remarks here. It’s a great show, well acted, and the ‘message’ is such a small part of the show. I actually like the part of Jackson’s bad TO – I’ve seen movies years ago where a young cop was bullied/mistreated by a senior officer, and mostly both were white. So what is the big deal of the bully being white? It doesn’t bother me, a white woman! Would U be ‘happier’ if the TO was black, the trainee white? Really, it is all so frustrating! Anyway, Nathan was great as usual, rest… Read more »

I like it as well but the episode where the top shooter was a woman and got replaced by another woman who beat all the men was bit obvious. And in the same episode we are told to forgive his mother for being a liar and completely without morals because she probably had it tough being a woman. I think the scriptwriters must be predominantly female and are trying to condition us. It’s very irritating. I am stopping watching.

a woman beating all the men? too obvious and unbelievable! what are these female writers trying to pull? that women can beat men or are as qualified to kick ass as men? no way! and then they have as believe that his mother deserves understanding because she was a single mom trying to survive? too obvious! she had no right not to have morals she was a mother for crying out loud she should act like one! those female writers trying to push their own agenda…mothers who aren’t saints, strong women doing their job..very annoying indeed…

The Lockdown cast, as usual did a great job, especially Fillion. It is just too bad ABC has to make it about prejudice agaist blacks – what a surprise – so predictable. The logical climax would have been for Jackson’s partner to have an epiphany and come to his aid. But no, that wouldn’t be woke, or show how racist white people are. Your station could do some good, but I guess it is always easier to push hatred instead of fellowship.

so instead.. it should be the misunderstood white savior who rushes to the black guy’s aid after he put him in the life threatening position? that would be better? to promote sympathy for the white guy? do white guys need more sympathy?