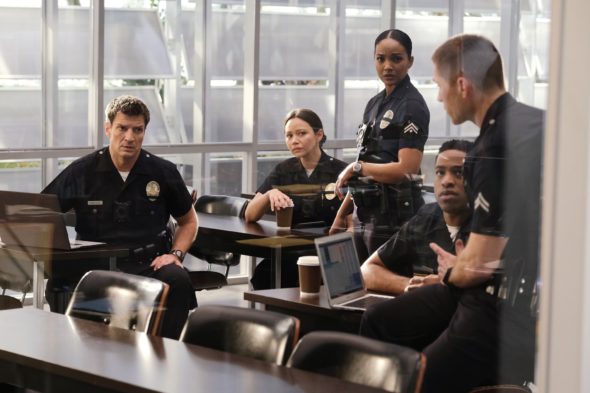 John and his fellow officers will be back on the beat for the 2021-22 broadcast season. ABC has renewed The Rookie TV show for a fourth year.

A police drama series, The Rookie TV show stars Nathan Fillion, Alyssa Diaz, Richard T. Jones, Titus Makin Jr., Melissa O’Neil, and Eric Winter. The series follows the experiences of John Nolan (Fillion), a middle-aged divorced man from Pennsylvania. He owns a construction company but decides to give up his old life to pursue a new career as a police officer in the Los Angeles Police Department. He graduates from the Police Academy and becomes the oldest rookie on the force. He works with Sergeant Wade Grey (Jones), training officers Angela Lopez (Diaz) and Tim Bradford (Winter), and fellow rookies Jackson West (Makin Jr.) and Lucy Chen (O’Neil). As season three begins, John nears the end of his training and must come to terms with the choices he made in pursuit of the truth.

Airing on Sunday nights, the third season of The Rookie averages a 0.49 rating in the 18-49 demographic and 3.73 million viewers in the live+same day ratings. Compared to season two, that’s down by 24% in the demo and down by 14% in viewership. There are just 14 episodes this season (due to the pandemic) and final two will air Sunday night.

The ABC renewal announcement was made via social media:

Congratulations to #TheRookie – we will be back for another season on ABC! 😍 pic.twitter.com/CBo29fHqyJ

Check out our ABC status sheet to track the alphabet network’s new series pickups, renewals, and cancellations. You can find lists of cancelled shows here.
What do you think? Do you enjoy watching The Rookie TV series? Will you be tuning in for season four on ABC?

It’s refreshing to see how dedicated a group of people are to each other, and how they not only each other backs but the community also.

First Show of Season #4 and they killed off Officer Jackson West – what a shocker that was and so very sad. I am sure the producers of the show had a good reason – but Jackson West will be missed.

Yes. I enjoy the plots and especially the interaction among the characters

That’s great. I really like the characters on this show, and am anxious to get my own copies when the DVDs are on sale on Amazon or ebay. So far, I’ve gotten seasons 1 and 2. I have no idea if this is a “realistic” portrayal of police life and training, but as a drama, it’s thrilling, and thoroughly engaging. It seems well-nuanced in terms of the crime-fighting and community outreach…not perfect, but blue lives matter as well as black, and frequently they’re one and the same life.( We do have many people of color in responsible police positions, and… Read more »

I love this show! Thanks for renewing.

Great Show! Glad to hear that the show was renewed.

Best news ever that The Rookie is being renewed. After Castle went off the air — I didn’t think it was possible for Nathan Fillion to find another hit show – but he has. Congratulations.

Love the show it Awesome waiting for 4-season to start.