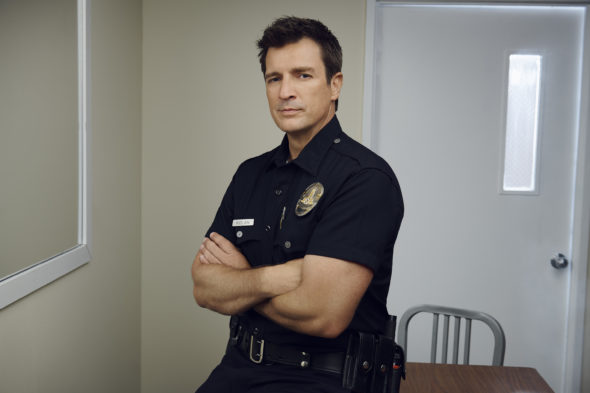 Will John and his fellow officers survive the second season of The Rookie TV show on ABC? As we all know, the Nielsen ratings typically play a big role in determining whether a TV show like The Rookie is cancelled or renewed for season three. Unfortunately, most of us do not live in Nielsen households. Because many viewers feel frustration when their viewing habits and opinions aren’t considered, we invite you to rate all of the second season episodes of The Rookie here. *Status update below.

An ABC A police drama, The Rookie TV show stars Nathan Fillion, Alyssa Diaz, Richard T. Jones, Titus Makin Jr., Melissa O’Neil, and Eric Winter. The series follows the experiences of John Nolan (Fillion), a middle-aged divorced man from Pennsylvania. He owns a construction company but decides to give up his old life to pursue a new career as a police officer in the Los Angeles Police Department. He graduates from the Police Academy and becomes the oldest rookie on the force. He works with Sergeant Wade Grey (Jones), training officers Angela Lopez (Diaz) and Tim Bradford (Winter), and fellow rookies Jackson West (Makin Jr.) and Lucy Chen (O’Neil). As season two begins, John is six months into his career as a cop and is put to the test by new challenges, romantic relationships, and potentially deadly situations.

What do you think? Which season two episodes of The Rookie TV series do you rate as wonderful, terrible, or somewhere between? Do you think that The Rookie on ABC should be cancelled or renewed for a third season? Don’t forget to vote, and share your thoughts, below.

This is a great mature show – I love it!

Please renew The Rookie , I was so disappointed when Castle was cancelled. Love Nathan Fillion in this role, please renew for many seasons

Love this show! PLEASE bring it back for more seasons!

Love this show! Hope there are many more seasons

Love this show – KEEP IT!

I love this show. Don’t you dare cancel it.

THIS SHOW GETS FIVE STARS.

I really like the Rookie. Nathan Fillion is the best. Please renew for another season.

Love this show please To NOT DISCONTINUE THE ROOKIE, KEEP BRINGING IT BACK EVERY SEASON

Keep the Rookie TV show, it one of the best shows