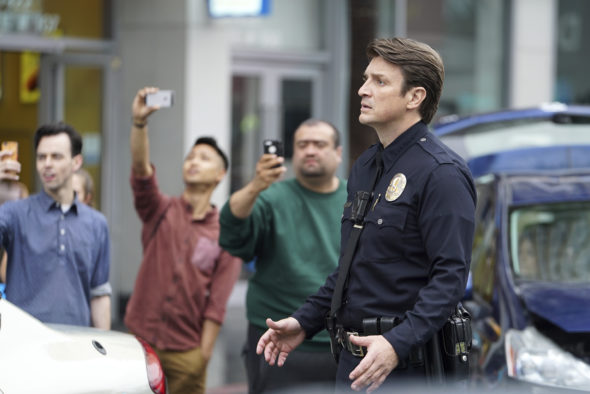 Does John Nolan have staying power? Has The Rookie TV show been cancelled or renewed for a second season on ABC? The television vulture is watching all the latest cancellation and renewal news, so this page is the place to track the status of The Rookie, season two. Bookmark it, or subscribe for the latest updates. Remember, the television vulture is watching your shows. Are you?

An ABC comedy-drama, The Rookie stars Nathan Fillion, Alyssa Diaz, Richard T. Jones, Titus Makin, Mercedes Mason, Melissa O’Neil, Afton Williamson, and Eric Winter. The story centers on John Nolan (Fillion), a small-town guy who, after a life-changing experience, decides to pursue his dream of being an LAPD officer. Now he’s the oldest rookie on the force, and the brass thinks he’s just having a midlife crisis. He’s got to keep up with his younger co-workers (not to mention young criminals) or he’ll risk lives. Maybe though, he can use the experience he’s gained with age, and the determination he has developed over the years, to make a real go of it. Either way, he’s got a secret weapon — his sense of humor.

The first season of The Rookie averaged a 0.73 rating in the 18-49 demographic and 4.17 million viewers. Find out how The Rookie stacks up against other ABC TV shows.

Will ABC cancel or renew The Rookie for season two? The ratings haven’t been very good but I suspect the network will give this series every chance to succeed. My guess is that it will be cancelled but ABC could renew it and make some changes to try to improve the ratings. I’ll update this page with breaking developments. Subscribe for free alerts on The Rookie cancellation or renewal news.

5/10/19 update: ABC has renewed The Rookie TV show for a second season.

What do you think? Are you glad that The Rookie TV show has been renewed for a second season? How would you feel if ABC had cancelled this TV series, instead?

They need to showcase the rookies sense of humor more. I like the show, show the humanity of the cops more and less of the grime of crime, we know that’s there. I watch it to enjoy myself and that burying case was too gruesome for me. I’d rather see a smile on the rookies face.