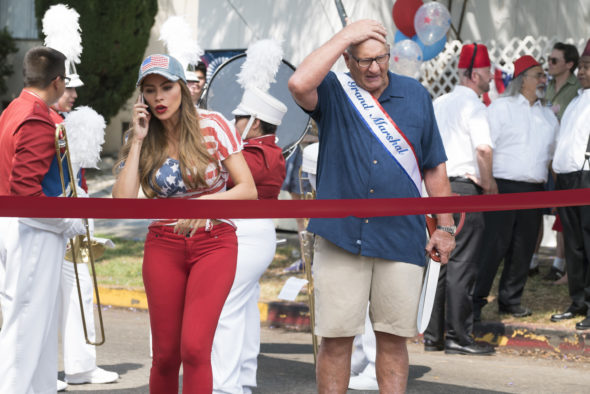 How goes modern living for the Pritchett-Dunphy-Tucker clan? Is the Modern Family TV show cancelled or renewed for an 11th season on ABC? The television vulture is watching for the latest cancellation and renewal news, so this page is the place to track the status of Modern Family, season 11. Bookmark it, or subscribe for the latest updates. Remember, the television vulture is watching your shows. Are you?

The 10th season of Modern Family is averaging a 1.26 rating in the 18-49 demographic and 4.83 million viewers. Compared to season nine, that’s down by 21% in the demo and down by 15% in viewership. Learn how Modern Family stacks up against the other ABC TV shows.

When Modern Family was renewed for both a ninth and 10th season, it seemed like season 10 would be the final installment in this family laugh-fest, particularly once The Middle ended with season nine. Disney is in the process of trying to buy 21st Century Fox, including 20th, the studio from which this series hails, though. Word is that it will be renewed for an 11th and final season. I’ll keep an eye on the ratings and update this page with breaking developments. Subscribe for free Modern Family cancellation or renewal alerts.

2/5/2109 Status Update: Modern Family has been renewed for an 11th and final season. Details here.

What do you think? Should the Modern Family TV show have ended with season 10 or are you looking forward to the 11th season on ABC?

Keep the writing as good as in the best season and I’ll watch it ’till the last episode!
One of the best shows ever!

I love Modern Family. It makes me laugh out loud every week. Please renew