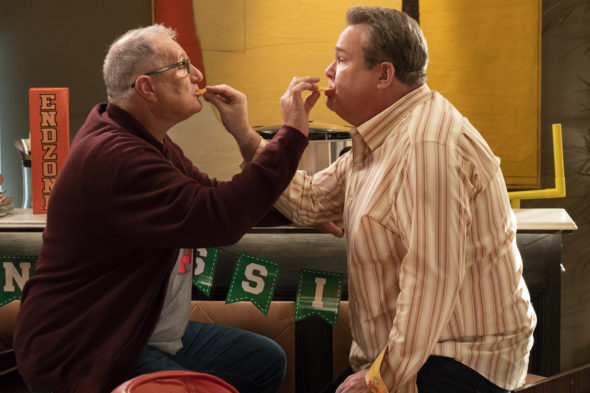 It’s the beginning of the end. ABC has renewed its Modern Family TV show for an 11th and final season. It’s not a surprise that the successful sitcom is ending with season 11. The renewal itself has been in the works for a while, but co-creator Steve Levitan warned last fall that if it came to pass, it would be the last.

Modern Family: A Look at the Ratings

The 10th season of Modern Family is averaging a 1.35 rating in the 18-49 demographic and 5.06 million viewers. Compared to season nine, that’s down by 15% in the demo and down by 11% in viewership. Learn how Modern Family stacks up against the other ABC TV shows.

“Chris and Steve have created one of the most seminal and iconic comedies in television history,” said Karey Burke, president of ABC Entertainment. “In its final season, there will be more milestone events that anyone who has been a fan of the series won’t want to miss.”

Levitan and Lloyd both offered a cheeky response to the news that the sun will soon set on the Pritchard-Dunphy clans.

“For 10 years, our characters have bravely faced turning points in life and moved through them to great personal enrichment; we have chosen a different path by doing one more season of ‘Modern Family,’” said Lloyd.

Said Levitan: “Even after 10 years together, we realized there are still some things our writers don’t yet know about each other’s sex lives.”

What do you think? Are you a fan of the Modern Family TV show? Is it ending at the right time, or would you like to see it go even longer still? Sound off in the comments.

Modern family is one of my favorite shows. Honestly I think modern family could of been a show that could go on forever, because hailey’s kids could of grown up to be the parents.

It’s a sad day when Modern Family ends! It’s one of the all-time GREATS and a show this generation has grown up on. Please don’t end it!

I am sad to see Modern Family leave TV. I love and adore this show! It has given me many laughs over the years.

Sorry to hear Modern Family cancelled. Was looking forward to the next generation of children with Haley’s babies. Still a very funny, but rich show.

I love Modern Family. I wish it would be on for a few more seasons. When they go it will be like losing real friends!

Series has become long in tooth. It is time to go. What was once amusing and quite entertaining has lost its luster. Story lines have become boring. Sorry.

Going to miss it. It was very funny in lots of different ways. Always enjoyed watching it. Sorry to going to end.