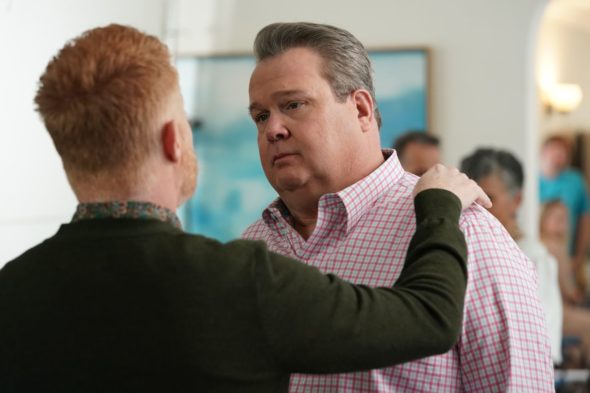 Now that Modern Family’s over, will there be a spin-off? Recently, co-creators Steve Levitan and Christopher Lloyd spoke with Deadline about the potential future of the ABC TV show.

In the interview, Steve Levitan revealed that he doesn’t think there could be another season of Modern Family at this point:

I don’t feel like I left anything on the table. I personally don’t go like, oh, if only we had another season we could get into this or that. I feel like we made a really nice show that entertained a lot of people, that brought some joy and laughter into people’s lives, and it was time to go.”

But what about a spin-off for the ABC series? Levitan said that’s a possibility for Cam and Mitchell:

At the moment I’m personally not thinking about that. I think that there are a couple of writers who are thinking about well, is there a Mitch and Cam spinoff, but they’re literally just thinking about it. They’re using this time that we have now to think about it, if there’s something there. I’m not driving this but I’m a huge fan of Jesse and Eric, and those characters are of course near and dear to me, and I certainly think that they’re strong enough to carry a show.”

And what about the other characters? Where did they end up? Lloyd says:

I have thoughts, I think that Alex, she probably will grow living in Europe and kind of become…she’s always been a little bit estranged from the family, maybe a little bit more in that direction but always with a feeling of obligation to check in on people and be a reliable one in the family.”

What do you think? Are you a fan of Modern Family? Were you satisfied with the finale?

I love this show so much! I was sad to see it end, but I did like how they did it.The idea that everyone can always go home is heartening. ❤️ I would love to see a spin-off with Mitch &’Cam. They’ve always been my favorite household (but I love them all!), and I would love to see Lilli, probably my favorite character, as she grows up. Would be fun to see how Mitchell adjusts to farm life—LOLOLOLOLOLOLOOOOOO!! And family members could always drop by once in a while, or vice versa. Thanks for an amazing journey guys—and for becoming… Read more »

What I REALLY want to know is what happens to Larry—-LOL! Also, how many Larrys have they had??? And does Lily ever find out that they’ve had more than one Larry?!

There is no more Mitch and Cam stories. The only story would be the kids as they are growing and changing. But even then I’m not so sure it would work.