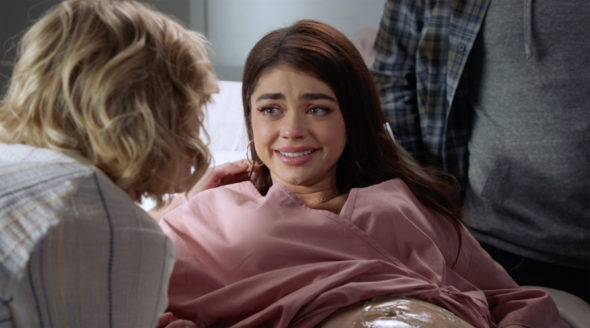 Modern Family may be entering its final season, but will this be the end of the Dunphys? Recently, ABC boss Karey Burke spoke with Deadline about possible spinoff ideas for the hit TV show.

In the interview, Burke revealed to Deadline that there is a possibility for a Modern Family spinoff that focuses on Haley Dunphy (Hyland) and her new family. However, series co-creator Steve Levitan wants to focus on the the final season of Modern Family right now before discussing any spinoffs.

I get smacked down every time I bring it up to Steve Levitan, so I’m going to stay quiet for a little while,” she said. “They’ve just started production on the final season — I was at the first table read last week, which was so great, and I’m going to let them focus on that.”

The 11th and final season of Modern Family premieres on ABC on September 25th at 9 p.m. ET/PT.

What do you think? Are you a fan of Modern Family? Would you watch a spinoff series?

I loved this show a lot, it makes me cry just thinking about having it be an end. I’m young so I practically grew up watching it, this show means a lot to me and it was the best ever!!! I would love to see a spin-off.

Love Modern Family!! Will miss seeing everyone each week. It was definitely the best show on TV. I would welcome & watch a spin-off. Please make this happen!!!

I also would love a Mitch and Cam spin off

I wish modern Family was not ending. But if a spin-off hell yeah

Wonderful show…We would all love to see another season!

Except I have UVerse and can’t get CBS!

All I can say is switch… but certainly NOT just to watch that train wreck!