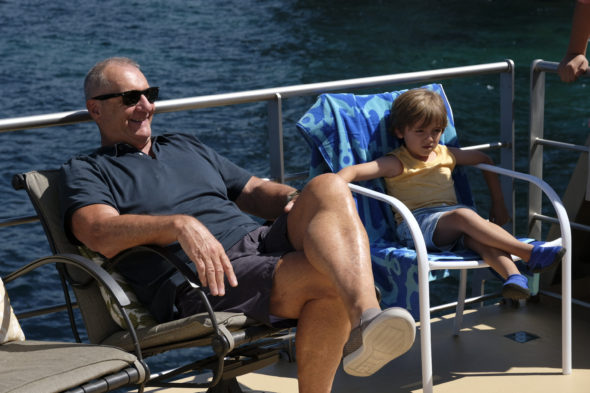 What is in store next, for the Pritchett-Dunphy-Tucker clan? Is the Modern Family TV show cancelled or renewed for a 10th season on ABC? The television vulture is watching for the latest cancellation and renewal news, so this page is the place to track the status of Modern Family, season 10. Bookmark it, or subscribe for the latest updates. Remember, the television vulture is watching your shows. Are you?

In season nine, with Alex (Winter) back at school and Luke (Gould) spreading his wings, Phil (Burrell) and Claire try to navigate their nearly empty nest — although Haley (Hyland) is still living at home. Similarly, Jay, Gloria (Vergara), and little Joe (Maguire) have to get used to Manny (Rodriguez) being at college. Meanwhile, Cameron Tucker (Stonestreet) and Mitchell steel themselves, when Lily heads off to middle school as a newly-minted gifted student.

Currently, the ninth season of Modern Family averaged a 1.59 rating in the 18-49 demographic and 5.69 million viewers. Compared to season eight, that’s down by 24% in the demo and down by 17% in viewership. Learn how Modern Family stacks up against the other ABC TV shows.

Between its strong performance and the fact that the Alphabet Network has already renewed it through season 10, there are no imminent worries it will be cancelled. Still, I plan to keep a hungry eye peeled on the Nielsens. Although co-creators Steve Levitan and Christopher Lloyd are thinking about ending Modern Family next season, nothing is etched in stone. If it keeps earning big ratings, ABC may well make them an offer they can’t refuse. Take the guesswork out of fandom, and subscribe for free updates on any Modern Family cancellation or renewal news.


What do you think? Should the Modern Family TV show end with season 10 or would you like to see it renewed for season 11 or beyond on ABC? Would you watch a spin-off or sequel TV series? If so, what do you imagine it would involve?

When will modern family be canceled

I just read it time to end after next season . Really love it so funny great fan base of the show. Hope they all do very well kids on show for acting amazing and talented star.

I really loved “Modern Family” when it first aired, but now it seems as though it is losing its funny. Last season was just okay so…
If there is a spinoff with Ed O’Neill, Sofía Vergara, Ty Burrell, Jesse Tyler Ferguson, Eric Stonestreet, Sarah Hyland, Ariel Winter, Nolan Gould, Rico Rodriguez, Aubrey Anderson-Emmons, Jeremy Maguire, and Brigitte the French bulldog, then yes, I would be interested in watching but with humor.
it is about being funny.