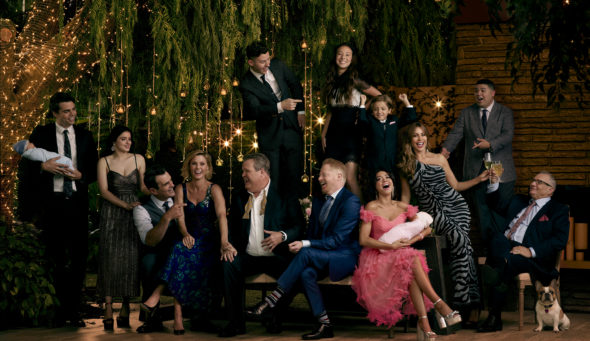 Is it truly time to say goodbye? Has the Modern Family TV show been cancelled or renewed for a 12th season on ABC? The television vulture is watching all the latest cancellation and renewal news, so this page is the place to track the status of Modern Family, season 12. Bookmark it, or subscribe for the latest updates. Remember, the television vulture is watching your shows. Are you?

The 11th season of Modern Family averaged a 1.04 rating in the 18-49 demographic and 4.48 million viewers. Compared to season 10, that’s down by 19% and 8%, respectively. Find out how Modern Family stacks up against other ABC TV shows.

There’s no need to spend the 11th season of Modern Family wondering if the venerable comedy will be cancelled or renewed for a 12th season. ABC has already announced that season 11 is the end so that the creators can craft a proper farewell. Could there be a reunion or spin-off? I’ll keep an eye on the ratings and update this page with breaking developments. Subscribe for free alerts on Modern Family cancellation or renewal news.

What do you think? Is the Modern Family TV show ending at the right time? Would you have watched a 12th season?

Modern Family have been such a loved ❤️ and reliable constant in our lives for so long, it really is with “such sweet sorrow” they depart
It got us through the ups & downs of our own lives as we shared the joys and sorrows of theirs.
My favourite show ever ❤️ I would definitely vote YES to renew this series!Love your Aussie viewers

Absolute best show, I am very disappointed to hear its over. One of the only good shown on netflix. It’s funny, romantic, sad and realistic.

defo would have watched season 12, best series of anything i ever watched, plsss releasseee season 12

This show has been on the top the past 10 years. It has dominated every chart possible with the ratings and views. Even at the end , i would still consider them to be in their prime. They have WAY more viewers than the majority. Ill never understand why creators ruin that chance for them to become like BBT.

Biggest fan would like it to get to 15 seasons

Time for this one to go !