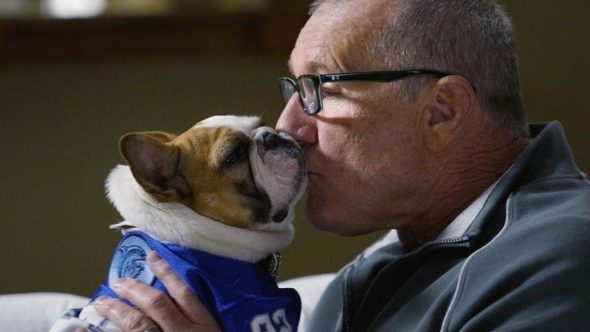 Modern Family has wrapped filming its final season, and there is some sad news to report. The dog behind Stella died just days after the series wrapped production. Stella was played by Beatrice the bulldog since season four. Per Deadline, she first appeared in the episode titled “Good Cop Bad Dog.”

Jesse Ferguson was just one member of the cast that went to social media to share a message about Beatrice’s passing. Check out his post below.

Rest In Peace sweet Beatrice. We love you so much 😭 https://t.co/kYzkl1m3ye pic.twitter.com/aGZZWH695g

Beatrice was just seen at the TCA’s in January posing for photos. The finale of Modern Family will air on ABC on April 8.

What do you think? Are you saddened by Beatrice’s passing so soon after Modern Family wrapped filming?

Of course it is sad , but honestly I don’t really think about it. That show was great while it lasted, but I feel it ran its course.

I love that little bulldog so much…… It’s really sad to see great animals dying. But she’ll be in great company over the rainbow bridge….. R.I.P

Sad to learn about Stella/Beatrice’s passing. Always loved seeing her. Having lost many dogs over the years, it is definitely like loosing a member of the family. They give us so much love in return.

While I watched Modern Family only on rare occasions it is SAD that the pet in the series passed on recently!I have lost many a pet in my 64 years and its sad but you remember the great times you had with each one!

So sad. She was such a cute, sweet little dog.
My condolences to the cast and owner(s) of
Stella/Beatrice.

Awww. Very sad. How ironic that she waited to pass after the season ended. I could cry thinking of her

It is ALWAYS sad when a beloved animal dies. May she rest in peace. Losing a pet is heartbreaking as they are a part of a family. Being part of a show that brought her into everyone’s home week after week leaves sadness of her passing to many people who enjoyed seeing her.