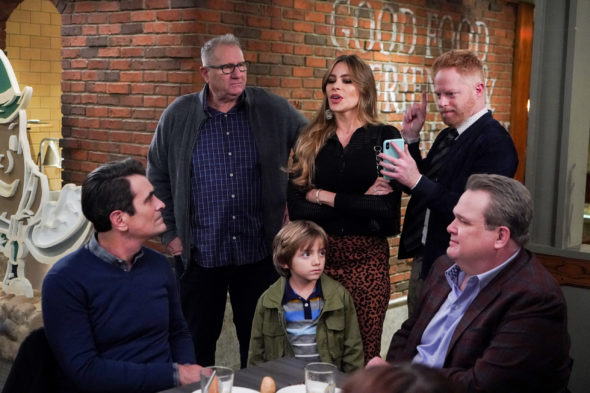 Modern Family is getting ready for its big finish on ABC, and the network is trying to send the series off right. ABC has planned a marathon of episodes for March 11, and the episodes were selected by fans of the series. The series will take the viewers back by airing the series premiere that started it all, and that episode will be followed by the five additional viewer selected episodes.

ABC revealed the episodes in a press release. Check that out below.

“8:00-8:30 p.m. – “Pilot” (OAD: 9/23/09) – Today’s families come in all shapes and sizes, and that is very evident in Jay Pritchett’s very full and very blended family. Jay and his new gorgeous, and much younger wife, Gloria, are happily married and getting accustomed to their new life together. But when her pre-teen son develops a crush on a 16-year-old girl, it becomes apparent that Jay and Gloria may have some generational and cultural gaps to bridge. Jay’s grown daughter, Claire, has a family of her own – three kids and a husband, Phil, who is practically a giant kid himself. Things get a little tense when their teenage daughter, Haley, brings a boy home and Phil tries to adopt the cool, hip dad approach. Then son Luke misuses his BB gun, which results in Phil and Claire turning it right back on to him. Jay’s grown son, Mitchell, is in a committed relationship and has just adopted a baby girl from Vietnam with his life partner, Cameron. They’re going through the joys and anxieties of bringing a baby home for the first time, but Mitchell still has the daunting task of introducing their new addition to the whole family.

8:30-9:00 p.m. – “Caught in the Act” (OAD: 1/19/11) – Plans backfire when the kids go to surprise their parents with breakfast in bed on their anniversary, only to catch Phil and Claire in a compromising position. Meanwhile, Jay and Gloria’s Vegas getaway is thwarted by a brutally honest email that was accidentally sent to Claire, and Mitch and Cam desperately try to get an “in” at the hot new neighborhood restaurant whose owner happens to be a mom (played by Rachael Harris) at Lily’s preschool.

9:00-9:31 p.m. – “Door to Door” (OAD: 10/5/11) – Everyone sets their eyes on a goal: Jay is determined to help Manny sell wrapping paper for a school fundraiser; Claire petitions the city for a stop sign to be installed at a high-traffic intersection; Mitchell is hell-bent on proving a point with Cameron, and neither one of them will back down; Phil and Luke will stop at nothing to create a viral video sensation; and Gloria is desperate to find Stella after losing her.

9:31-10:00 p.m. – “Las Vegas” (OAD: 3/26/14) – The adults are Vegas-bound when Jay hooks them up with Excelsior Level hotel accommodations, courtesy of one of his big clients; but after learning there’s an even higher level, Jay becomes obsessed with upgrading. Meanwhile, everyone’s sneaking around when Claire secretly hits the tables to win back money she lost years ago; Phil goes underground auditioning for a secret society of magicians; Cam ducks out of a spa day with Mitch to join their friend’s bachelor party shenanigans, and Gloria is determined to hide a female version of dog butler Barkley from Jay.

10:00-10:30 p.m. – “Connection Lost” (OAD: 2/25/15) – Claire’s computer becomes the hub of all the family’s activities when she gets stuck at the airport and is desperate to reach Haley after a big fight. After FaceTiming with Phil and the rest of the family to help track her down, Claire quickly turns to online snooping which inevitably becomes disturbing really quickly and everyone gets sucked into the online drama.

10:30-11:00 p.m. – “The Alliance” (OAD: 2/14/16) – Hayley’s plan for a fun-filled girl’s day with Rainer Shine’s teen daughter may be a little more angst-filled than expected. Meanwhile, Luke finds himself in a compromising position with a widow at the club (played by Joely Fisher) and unwittingly helps his grandpa, Jay, with his petition. At the Pritchett-Tucker home, Gloria, Phil and Cam have formed a secret alliance to ensure their respective “mistakes” are concealed from their spouses. However, their diabolical plan may be derailed when Mitchell starts suspecting something just isn’t right.

This news comes as the cast and crew of Modern Family wrap production on the series. Several members of the cast went to social media to share about the wrap of filming. Check out their posts below.

Our last day shooting ⁦@ModernFam⁩. If you follow me on Instagram you know @TraceAdkins⁩’ ‘You’re Gonna Miss This’ has been my backdrop to our last few days of filming. Thanks Trace for playing along and thank you all for allowing us into your homes for the last 11 years pic.twitter.com/h8oeFUEL42

Yesterday was one for the record books. The show I have called my second home for the past 11 years filmed it’s final scenes last night. The minute our 1st A.D.s called series wrap on everyone, we burst into applause, then tears. pic.twitter.com/exEXeiZNmx

We celebrated filming 250 episodes the only way we knew how- together! So much love was felt on stage 5. So grateful to have worked with this amazing cast & crew! I love you all so much!! pic.twitter.com/YgFbwqWQgr

I will never forget this set, this people ,there where only good times. Thank you Moden Family❤️❤️ Thank you Gloria Pritchett🎬

In just a few hours we will series wrap on @abcmodernfam, and along with everything else, I will be saying goodbye to the trailer I have had for almost a decade. Goodbye trailer! Goodbye Alex plaque! 😢 #modernfamily #memories #family #farewell

I love these people with all my heart. 11 years together is proof you and your tv sister will start wearing the same outfit, siblings for life will be made, and you’ll forever fight over the same professor 😂 We’ll always be Dunphys and we’ll always have each other ❤️

No amount of photos will ever convey what this day means to all of us, but here are some to share. @abcmodernfam #modernfamily #lastday

What do you think? Are you sad to see Modern Family end? Did you want another season?

No I will be ok with out it . Some shows just run there course and it’s time to go !