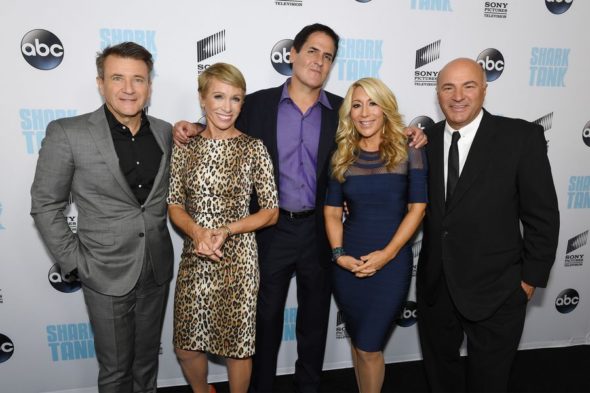 The dealmaking will continue into the 2019-20 television season. ABC has announced that they’ve renewed their Shark Tank TV show for an 11th season.

SHARK TANK – SEASON 11
The recipient of the 2017, 2016, 2015 and 2014 Emmy® Award for Outstanding Structured Reality Program, “Shark Tank” features The Sharks – tough, self-made, multimillionaire and billionaire tycoons – as they invest in America’s best businesses and products. The Sharks will give people from all walks of life the chance to chase the American dream and potentially secure business deals that could make them millionaires. Mark Burnett, Clay Newbill, Yun Lingner, Max Swedlow, Phil Gurin, Mark Cuban, Barbara Corcoran, Lori Greiner, Robert Herjavec, Daymond John and Kevin O’Leary are the executive producers of “Shark Tank,” which is based on the Japanese “Dragons’ Den” format, created by Nippon Television Network Corporation. The series is produced by MGM Television in association with Sony Pictures Television.

The 10th season of Shark Tank is averaging a 0.79 rating in the 18-49 demographic and 3.59 million viewers. Compared to nine, that’s down by 21% in the demo and down by 12% in viewership. It’s unclear how many episodes will air this season (13 have aired so far). The past two seasons have had 24 episodes each while other seasons have had as many as 29 installments.

Today, the alphabet network also renewed The Good Doctor for a third season and A Million Little Things for season two. At this point, it looks like all three will see their new seasons launch in Fall 2019.

What do you think? Do you like the Shark Tank TV show on ABC? Are you watching the current 10th anniversary season? How long should this series continue to run?

Is there a way that we can submit an idea without going on TV?

I love Shark Tank and I watch all reruns again and again. I hope they never stop.

I watch every episode and love all the sharks. Yes, even Mr. Wonderful.

My family and I never miss it, we really like it and hope it goes on for a long time.