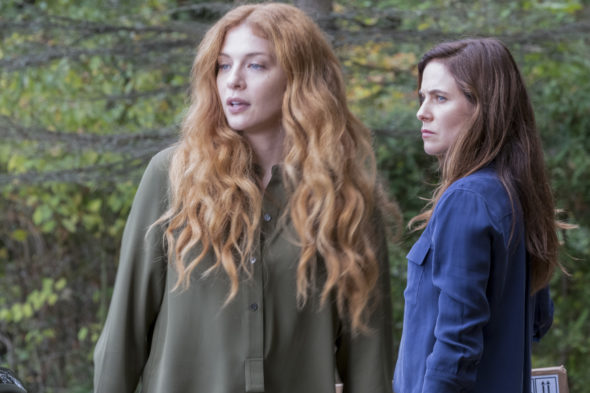 Will Dr. Mary Harris kill again? Has the Mary Kills People TV show been cancelled or renewed for a third season on Lifetime? The television vulture is watching all the latest cancellation and renewal news, so this page is the place to track the status of Mary Kills People, season three. Bookmark it, or subscribe for the latest updates. Remember, the television vulture is watching your shows. Are you?

A Lifetime black comedy-drama, Mary Kills People stars Caroline Dhavernas, Jay Ryan, and Richard Short. The second installment of the series (which airs on Global in Canada) features guest stars Rachelle Lefevre and Ian Lake. The story centers on Dr. Mary Harris (Dhavernas). This physician and single mother also operates a mercy-killing business on the side. Season two kicks off eight months after Mary and Des (Short) framed Grady (Greg Bryk) for their patients’ deaths. After his release from prison, Des is happy to re-team with Mary, but she wonders if she was better off without him. Meanwhile, the mysterious Olivia Bloom (Lefevre), presents them with a deadly request that could change everything.

The second season of Mary Kills People averaged a 0.07 rating in the 18-49 demographic and 299,000 viewers. Compared to season one, it was down by 58% and 53%, respectively. Find out how Mary Kills People stacks up against other Lifetime TV shows.

The ratings are way down when compared to the first season on Lifetime. The series is a co-production with Canada’s Global Television, so a renewal depends, in part, on its success with our neighbors to the north. For now, I will keep a hungry eye trained on the ratings and update this page with breaking developments. Subscribe for free Mary Kills People cancellation or renewal alerts.

6/4/2018 Status Update: Mary Kills People is renewed for season three on Global in Canada, but not yet in the US, on Lifetime. Details here.

What do you think? Do you hope the Mary Kills People TV show will be renewed for season three? How would you feel if Lifetime cancelled this TV show, instead?

Hello!
There is a season 3 but unfortunately I have Spectrum cable and I can’t get it. And by the way Spectrum s**ks.

I so miss this show……. Spectrum cable is horrible.

I am quite saddened that the show totally ending. I really loved the show and it’s spell bounding story lines. Sad to see it go…

Yes. But where in the Us? I have to buy Amazon tv? Or can I see it on my mobile device

There are also people in the United States that would like to see the final season also!

Please renew the show, love it so much! Simple but spell bounding. Can’t wait

I enjoy the show. If anyone watches it they would continue. .Richard Short is an excellent actor .I hope there will be more then just 6 shows and will continue for years.

I hope that there are also more than six shows in season three.

Please do not cancel. My friends and I love the show. We can’t wait for season three hopefully with Jay Ryan.

My husband and myself LOVE the show!!! PLEASE RENEW!!!!!!

I Love this show and its original idea, would love it to keep going! But at least want an ending to the series! Thanks.