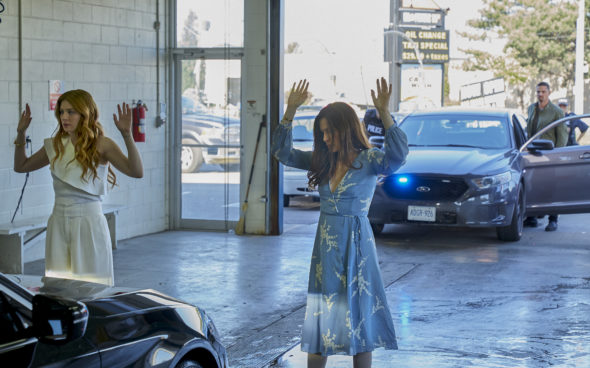 What’s your verdict on the mission of Dr. Mary Harris during the second season of the Mary Kills People TV show on Lifetime? As we all know, the Nielsen ratings typically play a big role in determining whether a TV show like Mary Kills People is cancelled or renewed for season three. Unfortunately, most of us do not live in Nielsen households. Because many viewers feel frustration when their viewing habits and opinions aren’t considered, we’d like to offer you the chance to rate all of the Mary Kills People season two episodes, below.

A Lifetime comedy-drama, Mary Kills People stars Caroline Dhavernas, Jay Ryan, and Richard Short. The second installment of the series (which airs on Global in Canada) features guest stars Rachelle Lefevre and Ian Lake. The story centers on Dr. Mary Harris (Dhavernas). This physician and single mother also operates a mercy-killing business on the side. Season two kicks off eight months after Mary and Des (Short) framed Grady (Greg Bryk) for their patients’ deaths. After his release from prison, Des is happy to re-team with Mary, but she wonders if she was better off without him. Meanwhile, the mysterious Olivia Bloom (Lefevre), presents them with a deadly request that could change everything. **Status update below.

What do you think? Which season two episodes of the Mary Kills People TV series do you rate as wonderful, terrible, or somewhere between? Should Lifetime cancel or renew Mary Kills People for a third season? Don’t forget to vote, and share your thoughts, below.

**6/4/2018 Status Update: Mary Kills People is renewed for season three on Global in Canada, but not yet in the US, on Lifetime. Details here.

This is such an unusual show with great writing and acting about a topic that so many people must think about and consider as an alternative to rotting in a nursing home one day. Even if you can afford a decent one, or you are facing catastrophic illness that will not only kill you but also put you and your loved ones through hell and financial burdens???? Love the way this show makes everyone think about how we deal with end of life issues and the hero’s that help people make their wishes come true. I’m really hoping I get… Read more »

Great show, please return in the US!!!!!

Ditto!! Love it too and hoping to see season 3 in the States!

This show is excellent! it should continue production with or without US networks picking up the show or not. While the cashflow would be nice, produce the program regardless, their loss.
.