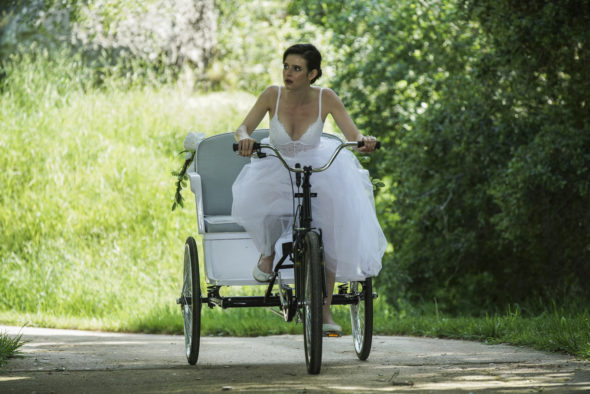 Will Amanda Klein live happily ever after? Has the American Princess TV show been cancelled or renewed for a second season on Lifetime? The television vulture is watching all the latest cancellation and renewal news, so this page is the place to track the status of American Princess season two. Bookmark it, or subscribe for the latest updates. Remember, the television vulture is watching your shows. Are you?

A Lifetime comedy-drama, American Princess stars Georgia Flood, Lucas Neff, Seana Kofoed, Rory O’Malley, and Mary Hollis Inboden. The runaway bride series centers on Amanda Klein (Flood), who is all set to marry fiancé Brett Weinbaum (Ehrich) when she catches him in flagrante delicto with another woman. When she reacts, the other woman is injured. Positively reeling, Amanda panics, flees the wedding venue, and winds up on the grounds of a Renaissance Faire, where she decides to remain.

Will Lifetime cancel or renew American Princess for season two? The ratings aren’t great but, the channel has very few original scripted series these days so it’s tough to know what ratings Lifetime considers to be good enough. For now, I will keep a hungry eye trained on the ratings and update this page with breaking developments. Subscribe for free American Princess cancellation or renewal alerts.

8/29/19 update: Lifetime has cancelled the American Princess TV show so there won’t be a second season.

What do you think? Do you hope the American Princess TV show will be renewed for a second season? How would you feel if Lifetime cancelled this TV show, instead?

This series was hardly advertised .. It was sheer luck i came across it, I am beyond mad that american princess was cancelled it. The show goes beyond the usual (12)medical dramas, the(16) crime scene/criminal shows, the (14) love stories with the same plots!!! Super disappointed and had anyone even knew the show existed they would have watched!

My hubby and I love the American Princess series , makes us laugh. We r in our 60’s and hv been going to different types of faire’s for decades . Even though this show is not as accurate as real Ren Faires it it close enough for mass audience viewing. It’s quirky, funny and has many actors to love. Bravo for taking the risk, many people I know from all walks of life love this show. We are both retired VP’s , we know attorneys , first responders, teachers, stay at home moms etc. who love this show! Please bring… Read more »

I thought the show was awesome. The premise was fresh and writing was great. I sure hope it’s renewed for season 2. Can’t wait to the see the new Queen 🙂

The show was freaking hilarious. The humor and sarcasm and overall good vibes I certainly hope that they renewed for season two. I came across it on demand and I literally binge watched the whole season in one night because I couldn’t stop watching it. Two thumbs up for Shizzle.

Obsessed with American Princess . Would be heartbroken not to see the new Queen not take her reign, hehehe. The setting reminds me of all the Renaissance Festivals I’ve been to. Please #LifetimeTv keep #AmericanPrincess on for a second season!

Great show! Can’t wait to see what happens next. Yes to a second season!

This show was amazing! I really want a second season

I would love to see a second season of American Princess.