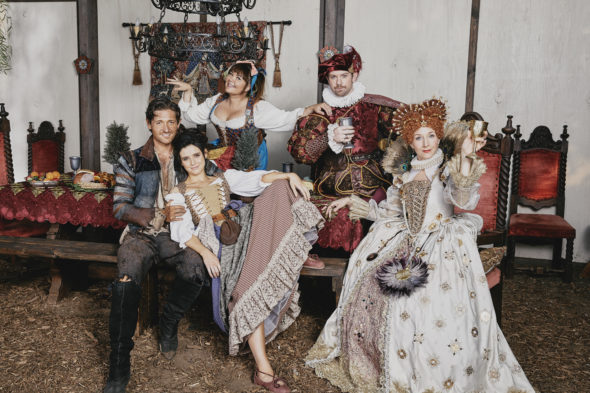 TV show description:
From creator Jamie Denbo, the American Princess TV show is a runaway-bride comedy-drama. The series centers on Amanda Klein (Flood), who is all set to marry fiancé Brett Weinbaum (Ehrich), when she catches him in flagrante delicto with another woman. When she reacts, the other woman is injured, so Amanda panics and flees the wedding venue, and winds up on the grounds of a Renaissance Faire.

While dressing for her ceremony, trying to avoid medicated mother Joanntha (Warren), and enjoying the morning with her cynical sister, Erin (Goldberg), Amanda gets a FaceTime call from Brett. When she answers it, she also gets quite an eyeful, when sees that he has called her accidentally. It is clear he didn’t mean to call, as Brett rather busy with another woman.

Amanda rushes to their cabin on the wedding grounds to find Brett otherwise engaged in his “last hurrah.” While trying to talk her down, Brett so enrages Amanda that she lashes out at him and accidentally pushes down the other woman, who sustains a concussion and bites off the tip of her tongue. Of course, she manages to spew blood over the bodice of Amanda’s wedding dress, in the process.

In a panic, Amanda takes off and eventually winds up on the grounds of a Renaissance festival. For the entire night, she mistakenly assumes she is at a theme wedding, and the amount of alcohol she consumes fails to provide her any clarity on the subject

Since Amanda took off without her phone and doesn’t know anyone’s phone number, it takes until well into the next day for her mother and sister to find her. During that time, the Ren Faire people welcome her, take care of her and listen to her.

Amanda was already devastated and humiliated by Brett’s betrayal when her family arrives and makes matters worse. She’s wounded by their treatment because they think she should have swallowed her pride and married Brett. Since they’re so image-obsessed, they think her departure was a bigger sin than Brett’s infidelity.

Fed up with living a life she wasn’t sure she wanted in the first place, Amanda decides to stay at the Ren Faire and start a new life.

Series Finale:
Episode #10 — Faire Well
Amanda and David discuss plans for the future; Brian and Juan Andres help Maggie tape another audition; Delilah deals with the end of the faire season by honoring a dearly departed friend; the Rennies close out the faire season with a bang.
First aired: July 7, 2019.


What do you think? Do you like American Princess TV series? Should this Lifetime show have been cancelled or renewed for a second season?

I loved the show. I was hoping for a second season, as I loved the characters. Suddenly I don’t miss cable quite so much.

Loved this show! Please bring it back!

This show was clever, and hilarious. If there is any way to bring it back for another season, please do! It’ a shame that anytime there is an original TV show that dares to step out of the box , it is canceled right away. It doesn’t even have the opportunity to build a following. I am so sad to see American Princess canceled. I just got several friends to watch it, and they loved it. They binge watched to get ready for the next season. Please reconsider! Most of what’ On, is a dull copy of every other show… Read more »

Yes, it is a very funny show. Please renew it!

A smart funny fast paced show that seamlessly blends real world stereotypes and problems with the gosh-I-never-have-been-to-a Renaissance faire environment to create a fresh almost r-rated delivery of funny and thoughtful. The Emma-esqe character of Amanda is a delight. Really well balanced ensemble cast. Underrated and not publicized enough. Just love it!