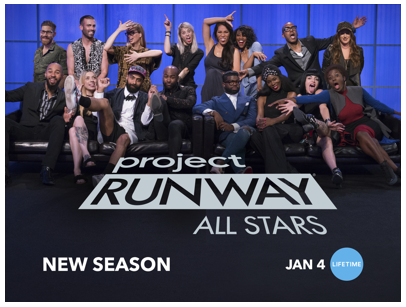 Are you ready for the new season of Project Runway All Stars? Lifetime just announced season six will debut in January.

Season six of Project Runway All Stars premieres on Lifetime on January 4th at 9 p.m. ET/PT.

New York, NY (December 11, 2017) — Sixteen talented designers will compete for a second chance at runway gold with the return of Lifetime’s hit series Project Runway All Stars, premiering Thursday, January 4 at 9pm ET/PT. Eight All Stars veterans will go up against eight former Runway designers making it to the All Stars battle ground for the very first time. Alyssa Milano returns as host with judges Isaac Mizrahi and Georgina Chapman and Anne Fulenwider, Editor-in-Chief of Marie Claire joining as mentor.

The winner of Project Runway All Stars Season six will receive a fashion spread in Marie Claire magazine and a position as contributing editor for a year, and a complete sewing studio from Brother Sewing and Embroidery. The winner also receives a once in a lifetime trip to London, England, and luxurious skincare and makeup from Rodial and accessories and styling services from Intermix, to enhance their next collection. To top it all off, the winner receives a $100,000 grand prize to elevate their business and build their brand.”

What do you think? Are you a fan of Project Runway All Stars? Will you watch the new season?

I’ve had my fill of any and all Project Runways. This past season was a fiasco and too much drama. Project Runway whether all stars or prospective designers is off my list. It could be cancelled and I could care less.