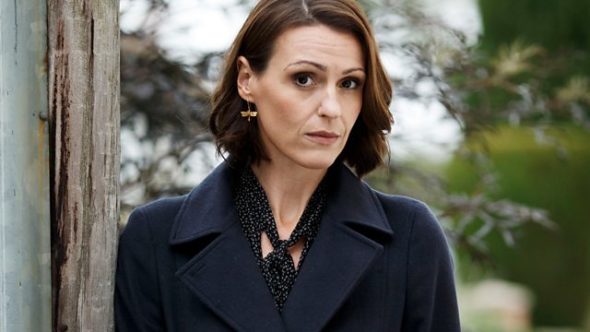 Is there a doctor in the house? Has the Doctor Foster TV show been cancelled or renewed for a third season on Lifetime Movies? The television vulture is watching all the latest cancellation and renewal news, so this page is the place to track the status of Doctor Foster, season three. Bookmark it, or subscribe for the latest updates. Remember, the television vulture is watching your shows. Are you?

A Lifetime Movies British drama series, Doctor Foster stars Suranne Jones, Bertie Cavel, Tom Taylor, Jodie Comer, Victoria Hamilton, Adam James, and Prasanna Puwanarajah. The story centers on Doctor Gemma Foster (Jones), whose life falls apart after she discovers her husband’s affair. In season two, things are getting back to normal for Gemma. She’s trying to move on from her divorce and raise her teenaged son, Tom (Taylor), but her ex-husband Simon’s (Cavel) return complicates everything.

This series originates on BBC One in UK, so its fate largely in their hands. If they do renew the series it seems unlikely that Lifetime will want to purchase the rights since they pulled the show from their schedule after just two episodes and it took them six months to air the rest. I will keep a hungry eye out, searching for breaking developments. Subscribe for free Doctor Foster cancellation or renewal alerts.

What do you think? Do you hope the Doctor Foster TV show will be renewed for a third season? Do you think that Lifetime should have cancelled their second season airings?

Please please be another season!!

I would like another Doctor Foster season. Love this sht

Too late they waited too long.

I have just begun season 2. I find it very interesting but these people need therapy desperately, really. I can’t imagine living such a complicated life. I would like to see a 3rd season but binge-watching Season 1 and 2 episodes of Season2 has given me bad dreams and quite a headache.

I love the show.i hope for season 3

Yes! I would definitely watch a season 3! Just got finished watching it on Netflix… lots of storyline left.

I am also hoping there will be many more seasons!! Who do we contact?

Just to let you know that they have been out filming this show in the streets of Ancoats , Manchester, this morning … I saw them, I live there.

Please I want to see season 3 I love this show I watch it thru Netflix . Please don’t cancel this show!!!!!!!

Suranne Jones & Dr. Foster are my favorites of all time. I hope there will be additional season(s)