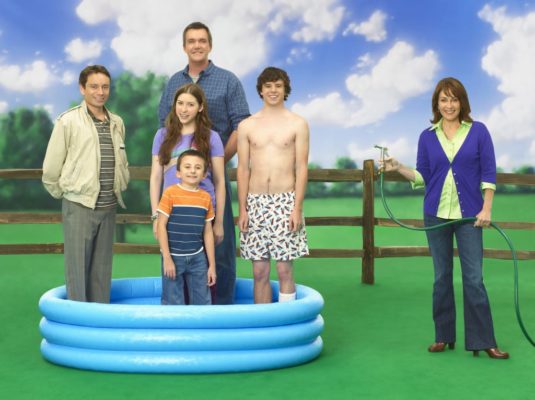 TV show description:
Living in the small town of Orson, Indiana (the “middle” of the country), Frankie Heck (Patricia Heaton) is a supermom. She’s kept busy wrangling three quirky kids, trying to keep her husband on track and working to sell cars for a local dealership. Unfortunately, she doesn’t do any of the jobs in a way that makes her very proud.

At work, she’s the third best salesperson but there’s only three salespeople and she consistently fails to make a sale. Her grumpy boss, Mr. Ehlert (Brian Doyle-Murray), is constantly threatening to fire her. Her friend and number two salesman, Bob (Chris Kattan), isn’t much better off and helps Frankie out where he can.

Mike Heck (Neil Flynn) is Frankie’s husband and works as a quarry manager. He doesn’t have a very orthodox parenting style, isn’t a very sensitive husband, and is known for being brutally honest. He loves Frankie though and together, they do their best to get through life.

Axl Heck (Charlie McDermott) is the oldest of the two Heck boys and was conceived during his parents’ Guns ‘n Roses period. He’s a typical teenage boy who’s sullen, eats the family out of house and home, and also has a penchant for walking around in his underwear. When his parents want to punish Axl, they wish that he had something cool like a car, TV, or cell phone that they could take away from him.

Sue Heck (Eden Sher) is the Hecks’ teenage daughter. As the middle child, she seems to be suffering from Jan Brady syndrome and doesn’t seem to be able to find her niche. Sue fails at everything she tries with great gusto. She never gives up but her parents kind of wish she would.

Brick Heck (Atticus Shaffer) is the youngest son and is known for his odd behavior. His best friend is his backpack and he whispers to himself for comfort. He loves to read and is likely the most intelligent Heck in the family.

Series Finale:
Episode #215 – A Heck of a Ride, Part 2
After nine hilarious and heartfelt seasons, a Heck leaves the nest as the family takes a road trip to Denver, where Axl will start his new job – and new life away from home.
First aired: May 22, 2018.

What do you think? Do you like The Middle TV show? Do you think it should have been renewed for a 10th season?

Yes. It should be returned, enjoy watching reruns also on Freeform. Family friendly is what we need more of today!

Yes they should make a season 10, and more seasons after that. Everybody loves this show, and it’s family friendly. One of the few good sitcoms on tv. Please bring back the middle

Does anyone know who Axl ends up marrying? It can’t be Lexi because he is living in the same house as he grew up in. My bet is he ends up with Weird Ashley.

He married Lexie. They are together at Sue’s wedding (Lexie is pregnant).

He ends up marrying Lexi 🙂 and they have 3 boys

We in Germany Love “The Middle”.

I love love love the middle. I wish they would never let it go. Slot of us middle class folks can relate and for alot of middle class family in which I grew up as can enjoy the memories of our parents struggling and teaching us valuable life lessons to pass on to our children. Please don’t let it end before the Heck kids finish college and take care of Frankie and Mike. The valuable lesson of you do for family you just do as Frankie teaches. Please reconsider taking this show off. It is waaayyyy better than any soap… Read more »

This show was super funny. Patricia Heaton should be recognized for her talent. You have other shows with no talent. I hated to see this show end. Ms. Heaton has class and is enjoyable to watch

anyone notice the headboard in master bedroom is the same as in EVERYBODY LOVES RAYMOND.

I love the Middle I’ve watched it faithfully for years. This was a great show, it will be missed.

Absolutely LOVE the Middle — love it’s family setting, something to watch after a long day that would make one laugh! 🙂 Family shows seem to have vanished but this was one i was hoping would NOT get cancelled. Understand actors wanted to move on but wish they had another season. Will definitely be watching ALL reruns. THANKS

I loved the tv show The Middle, I have all the dvd’s, and watch every day. They are so true to the way life really is for the average American. They should not have cancelled the show.

I’m hoping to find out when the Season 9 DVD’s are coming out. For the record, I like the b-Story involving Sue and Sean, but I wouldn’t have minded if they also added some scenes involving the Axl and Lexi love story. Maybe we would’ve been able to make some sense of what Weird Ashley was supposed to be doing when she flicked dead leaves in his face and the neighbors were all wishing him Bon Voyage.