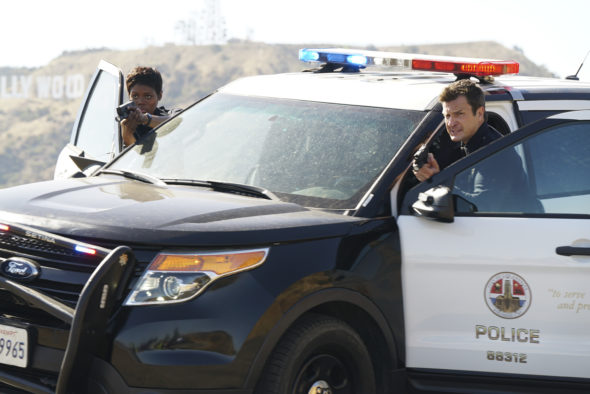 Does John Nolan make the grade during the first season of The Rookie TV show on ABC? As we all know, the Nielsen ratings typically play a big role in determining whether a TV show like The Rookie is cancelled or renewed for season two. Unfortunately, most of us do not live in Nielsen households. Because many viewers feel frustration when their viewing habits and opinions aren’t considered, we’d like to offer you the chance to rate all of The Rookie season one episodes here. *Status update below.

An ABC comedy-drama, The Rookie stars Nathan Fillion, Alyssa Diaz, Richard T. Jones, Titus Makin, Mercedes Mason, Melissa O’Neil, Afton Williamson, and Eric Winter. The story centers on John Nolan (Fillion), a small-town guy who, after a life-changing experience, decides to pursue his dream of being an LAPD officer. Now he’s the oldest rookie on the force, and the brass thinks he’s just having a midlife crisis. He’s got to keep up with his younger co-workers (not to mention young criminals) or he’ll risk lives. Maybe though, he can use the experience he’s gained with age, and the determination he has developed over the years, to make a real go of it. Either way, he’s got a secret weapon — his sense of humor.

What do you think? Which season one episodes of The Rookie TV series do you rate as wonderful, terrible, or somewhere between? Should ABC cancel or renew The Rookie for a second season? Don’t forget to vote, and share your thoughts, below.

Love the show especially Falon. Seen him in other series.

The Rookie is a very good and enjoyable program. Really glad to hear that has been renewed for a second season.

We have enjoyed this program soo much. It truely gives you a view on what the rookies go thru in daily life. It’s not like the other programs of its type. Plus Officer Nolon is the best at what he does.

I love it keeps me in stitches it has drama you have comedy and that is a lot in a series need more like this instead of those reality shows. It is a great show loved everything about it.