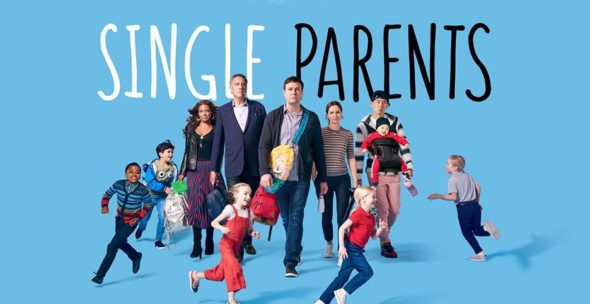 How do you like Will Cooper and the gang during the first season of the Single Parents TV show on ABC? As we all know, the Nielsen ratings typically play a big role in determining whether a TV show like Single Parents is cancelled or renewed for season two. Unfortunately, most of us do not live in Nielsen households. Because many viewers feel frustration when their viewing habits and opinions aren’t considered, we’d like to offer you the chance to rate all of the Single Parents season one episodes here. *Status update below.

An ABC ensemble comedy, Single Parents stars Taran Killam, Leighton Meester, Kimrie Lewis, Jake Choi, Marlow Barkley, Tyler Wladis, Devin Trey Campbell, Mia Allan, Ella Allan, and Brad Garrett. The sitcom centers on Will Cooper (Killam), a single father in his 30s, who is sorely in need of a life apart from raising his daughter, Sophie (Barkley). When the other parents realize how far out of touch he is with his own identity, they team up to help him come into his own.

What do you think? Which season one episodes of the Single Parents TV series do you rate as wonderful, terrible, or somewhere between? Should ABC cancel or renew Single Parents for a second season? Don’t forget to vote, and share your thoughts, below.

*5/10/19 update: ABC has renewed Single Parents for a second season.

Do not F this up!!!!! Love this show, cute, funny lite hearted. love every character even the kids are GREAT!!! and soooooooooo funny. You better watch out if you cancel this. My fav of all tv shows. That says alot.

I gave this show more than 3 episodes and so glad I did. Skeptical about getting to into it because shows get cancelled so quickly nowadays but I’m sticking around for it. Funny adults and kids…very rare. Never watched the Middle so can’t compare, Goldbergs is one of the most annoying shows on TV and still loving Modern Family.

one, if not my favorite shows. superb cast everyone plays a part. Fresh, funny and a feel good show with so many negative shows out there. Acting is outstanding by everyone. everyone should watch this. if the middle can get like 9 seasons than this should get 11. please keep single parents on t.v. forever.

I gave this show 3 eps. It is just stupid and poorly written. The asain guy doesnt know how to use a corkscrew and doesnt ask his boss butt asks children? Won’t be watching again.

I agree with Becky also. Will not be watching future episodes.

i thought the same thing the first episode but they have gotten so good. start watching again. one of my favorite now.

I lay this failure at the writers’ feet. Not funny. Lots of acting talent was wasted in this first episode. Didn’t anyone actually watch the finished product? If you did and you thought it was funny, you need to get a new job.

Beckys Comment is dead on! Its not funny and not its interesting…. just boring

Try it until episode 5, you’ll be hooked!!