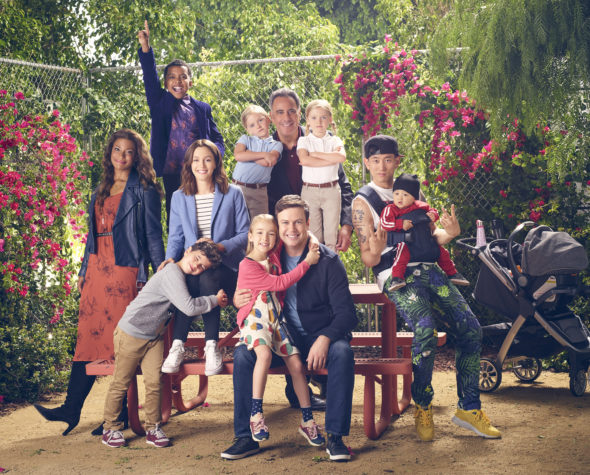 TV show description:
From creators JJ Philbin and Elizabeth Meriwether, the Single Parents TV show is an ensemble comedy. The series centers on Will Cooper (Killam), a single father in his 30s, who is sorely in need of a life.

When Will first meets the other parents at the school his daughter Sophie (Barkley) attends, he has been so focused on parenting his little girl, that he has forgotten he’s a human being who deserves a life of his own. Once the other parents realize he spends every moment on his kid’s life, they team up to help him see that he needs to reclaim his identity.

Series Finale:
Episode #45 — No. Wait. What? Hold on.
Angie struggles to recall the events of a wine-filled night of packing with Will, while Poppy secretly encourages Will to share his true feelings. Meanwhile, Derek arrives to gather Angie and her belongings, while Rory and Miggy are enlisted to find a hot guy to sublet the house.
First aired: May 13, 2020.

What do you think? Do you like the Single Parents TV series? Should this ABC TV show have been cancelled or renewed for a third season?

Please bring this show back I love this

It was a great show. I enjoyed it. Bring it back

That is so stupid! Just because it wasn’t watched on regular TV, doesn’t mean people weren’t watching it on Hulu. I know I was. Even caught it on TV a few times. It was hilarious, especially being a single mom. I so love it and waited patiently for the premiere.

It was a great show. Shouldn’t have been cancelled. ABC has failed again.

Great show it should not be canceled!!! Will miss

Favorite show ever, it was nice to have a down to earth, funny show to watch again. ABC should stop canceling all the shows like this

Fabulous show!!! So funny every single week! The kids on this show were amazing- very good at their craft! So I’m left hanging…… are Will & Angie going to finally get together?!? Ughhhhhh

I loved this show and so disappointed that it was cancelled! Gave me the laughs I needed in this crazy time we are in.

Another disappointment from ABC this was a great show it kept you laughing great cast
this is 3rd comedy I watch on ABC cancelled . Sometimes you just need a good down to earth show like this.

I am so disappointed that Single Parents has been cancelled! The show was lighthearted and relaxing to watch. Gosh I can hardly wait to see what ABC will replace the show with /S