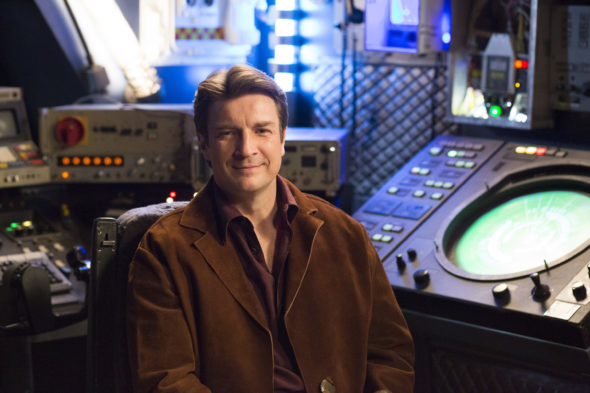 ABC ordered The Rookie TV show to series in October of last year. Now, the network has made that order official and released a season one teaser for The Rookie. Check it out, below. The light police procedural comes from creator Alexi Hawley and hails from ABC Studios and The Mark Gordon Company.

Nathan Fillion plays John Nolan, the oldest rookie in the LAPD. At an age where most are at the peak of their career, Nolan cast aside his comfortable, small town life and moved to L.A. to pursue his dream of being a cop. Now, surrounded by rookies twenty years his junior, Nolan must navigate the dangerous, humorous and unpredictable world of a ‘young’ cop, determined to make his second shot at life count.

Check out this description of The Rookie from ABC:

Starting over isn’t easy, especially for small town guy John Nolan (Nathan Fillion) who, after a life altering incident, is pursuing his dream of being an LAPD officer. As the force’s oldest rookie, he’s met with skepticism from some higher ups who see him as just a walking midlife crisis. If he can’t keep up with the young cops and the criminals, he’ll be risking lives including his own. But if he can use his life experience, determination, and sense of humor to give him an edge, he may just become a success in this new chapter of his life. From executive producer/writer Alexi Hawley and The Mark Gordon Company with ABC Studios.

After the cancellation of Fillion’s long-running ABC drama, Castle, the network kept him around. The above picture is from last night’s episode of American Housewife, “Finding Fillion.” He also guest stars in next week’s season two finale, “The Spring Gala.” Between 2016 and 2018, the Firefly vet recurred as weatherman Rainer Shine on ABC’s Modern Family, when he wasn’t in “Netflix and chill” mode on A Series of Unfortunate Events and Santa Clarita Diet.

What do you think? Are you a Nathan Fillion fan? Do you plan to check him out in The Rookie TV series on ABC? Tell us.

Ya, Fillion! He’s still (and always) watchable, believable and I’d say quite accomplished! I never get tired of watching him interact with other cast members and quickly pull the viewer into the scenario. I still watch “Castle” reruns; and in this newest reincarnation, as Nolan, he is as reliable as ever. His intelligence and insight are always in evidence.

This is a truly fun filled show, but what I find interesting is that it is also very informative. Having a 40 something Rookie is interesting and shows that this character is brave to try being a Police Officer. His age shows experience and wisdom. What a joy to watch on Tuesday Night. Something I very much look forward to. Good stories and good characters. The supporting actors are believable. Love the show. Please keep it going until I am in a retirement home, which will be in about 15 years.

I love this show! Which means the network will most likely cancel it. Ive learned garbage like the Kardasashians can run for years, but good shows like The Rookie and Elementary tend to get canceled…wish I knew what the heck was wrong with our society…

Looking forward to The Rookie! I think Nathan’s a great actor in both dramas and comedies. Great range! Can’t wait to see him on my TV screen again!

Love Nathan Fillion on Castle miss it every night. But, looking forward to The Rookie when it comes on..Go Fillion!!

Miss Castle had wished it was not canceled. Will watch The Rookie cannot wait!

Me too. I loved Castle too and I agreed with u on that show wasn’t canceled for season 9! I’m watching the reuns on ABC on the wknds which is on late night timeslots