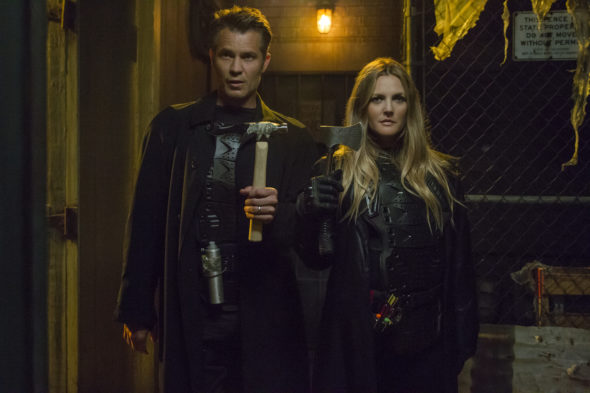 The Hammonds are just sort of muddling through life, until one day, Sheila undergoes an enormous change. As their lives descend into death and destruction, they realize that it sort of works for them.

Suddenly, Sheila wants what she wants, when she wants it. Where before their lives were rather humdrum, now that she is experiencing all of these primal, “undead” symptoms, she’s seeing the world through a fresh set of eyes. She’s also hungry in a way she never has been — for human flesh.

Although Sheila and Joel try to hide their new, grisly truth from their daughter, Abby knows something is up and refuses to stop until she has figured it out. Once she does, it triggers something of a rebellion.

At least Abby does not have to shoulder this new, disturbing knowledge, alone. The Hammond’s awkward neighbor, Eric (Gisondo) is in on the secret. He also has a store of knowledge on the undead and is nursing a monster of a crush on the girl.

Beneath all the blood and gore, Santa Clarita Diet ponders how relationships can continue to work, even when the people in them change. It explores themes including marriage, family, and parenting teens.

What do you think? Do you like the Santa Clarita Diet TV series? Should this Netflix TV show have been cancelled or renewed for season four?

was one of the best shows on Netflix… I still watch it!

The show is fantastic. Original in a world of remakes. There was so much more to tell. I hope they find a way to bring it back.

So what was the real reason this classic comedy was sh!tcanned? It was a shining light in the otherwise maudlin low rent gloom that is network television.
Did Olyphant and Barrymore put in for too much pay?
Did the midwestern bible bashing god botherers take offence?
Or did some network empty suit suffer a massive brain fade?
If it turns out the ratings fell then I’d have to opine that the garbage rich diet viewers are fed has finally resulted in a generalized lobotimization of the populace.
Trump probably has something to do with it!

Why does Netflix cancel the good shows? Only 3 seasons?? Should be at least 5! We miss this show! The storyline can go on forever and is as amazing as the actors are. Please bring them back!

Santa Clarita Diet should have been continued, at least for one more season so as to tie up loose ends. Fans deserve closure and answers to questions, imho.
Also, show was very popular as far as I could tell, so why the cancellation? Still puzzled by that.

I adore this show. So sad it’s not being picked up.