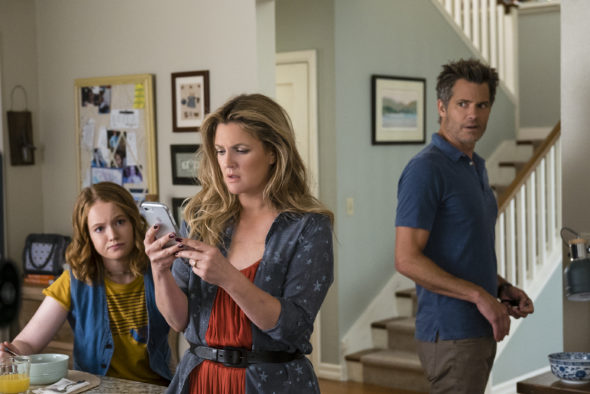 What’s next for the Hammonds? Has the Santa Clarita Diet TV show been cancelled or renewed for a third season on Netflix? The television vulture is watching all the latest TV cancellation and renewal news, so this page is the place to track the status of Santa Clarita Diet, season three. Bookmark it, or subscribe for the latest updates. Remember, the television vulture is watching your shows. Are you?

A Netflix horror-comedy TV series, Santa Clarita Diet stars Drew Barrymore, Timothy Olyphant, Liv Hewson, and Skyler Gisondo. The action centers on Sheila and Joel Hammond (Barrymore and Olyphant). This suburban couple sells real estate and lives with their teen daughter, Abbey (Hewson), in Santa Clarita, CA. The Hammonds are just sort of muddling through life, until one day, Sheila undergoes an enormous change. She begins experiencing some undead symptoms, and she’s hungrier than ever before — for human flesh. As their lives descend into death and destruction, they realize that it sort of works for them.

Unless they decide to publicize viewership, it is hard to predict whether Netflix will cancel or renew Santa Clarita Diet for season three. It was renewed for season two less than two months after it premiered on Netflix, so hopefully this time out, we’ll know relatively soon. I know you fans want more (whereas all the gore really whets my appetite). For now, I’ll keep an eye on the trades and update this page with breaking developments. Subscribe for free Santa Clarita Diet cancellation or renewal alerts.

What do you think? Did you think the Santa Clarita Diet TV show would be renewed for season three? How would you feel if Netflix had cancelled this TV series, instead?

This show is super hilarious and is one of my favourites, so I really hope it gets renewed.

This show makes me laugh out loud. I love it.

Love the show hope it comes back for season 3

This show is so addicting to watch! Please make more!!! One episode and you are hooked!!!! It’s creative and dark, but also very funny as well!

Note a fan of this one. I don’t find it clever at all. Netflix, you can do better!

This show just gets better and better with each episode. Even though different directors take the reigns with the episodes it all flows. Normally this type of humor is hard for me swallow but I’m hungry as hell for more. Come on season three!!!!

Please continue this show with season 3, we love it!

Just finished season two of Santa Clarita Diet, hilarious! There just HAS to be a 3rd season! Possibly a 4th, but third for sure in order to bring closure. PLEASE!!!!!