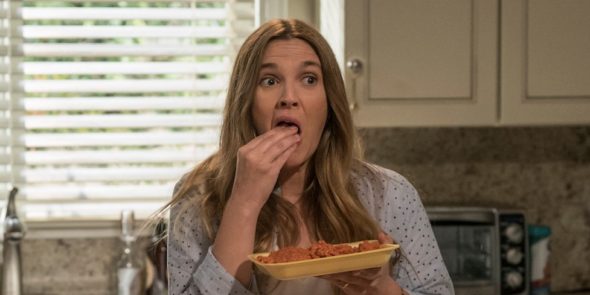 Season two of Santa Clarita Diet just premiered, but will there be another? Recently, showrunner Victor Fresco spoke with The Hollywood Reporter about the future of the Netflix TV show.

In the interview, Fresco revealed they are writing a story for a third season of Santa Clarita Diet if Netflix decides to renew the series:

There’s always more story. The whole season one took place over two weeks and season two takes place over two weeks, so they’re still only about a month into this incredible change that they’re going through. We have not been picked up for season three, but we have started with the writers. So we are back at work writing — fingers crossed. We don’t have any data to know how the show is doing, so we’ll just have to see.”

What do you think? Are you a fan of Santa Clarita Diet? Do you want a third season?

Thoroughly entertained by season 2. The cast is great. Long time Timothy Olyphant fan. Liv Hewson’s Abbey is the rare child family member that assists in lifting the show; not the customary teen annoyance. Hope there is a third season.

This is one of my FAVORITE shows. It’s so well written and the cast is great. I HOPE it is picked up for a 3rs season!!

This show is sooooooo funny! I absolutely love it. Please continue with many, many more seasons. This cast is fabulous! Keep advertising on regular tv so it gets more following.