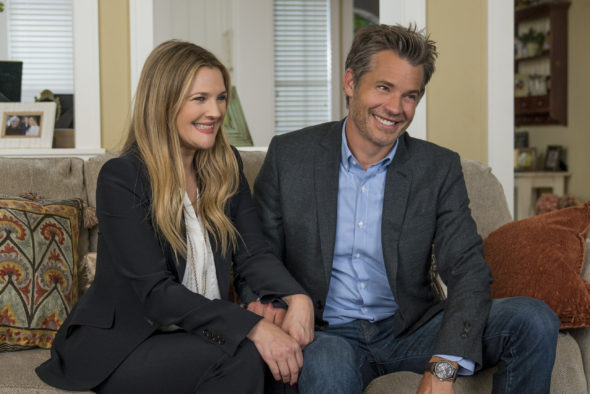 Understanding a diet only accomplishes anything when you stick to it, Netflix has renewed its Santa Clarita Diet TV show for a third season, with a start date TBD in 2019. Season two dropped to Netflix on March 23rd, and by the first week of April, showrunner Victor Fresco and his writers were crafting the next installment, in hopes of a season three renewal. Since their advance work paid off, watch the announcement, below.

A Netflix horror-comedy TV series, Santa Clarita Diet stars Drew Barrymore, Timothy Olyphant, Liv Hewson, and Skyler Gisondo. The action centers on Sheila and Joel Hammond (Barrymore and Olyphant). This suburban couple sells real estate and lives with their teen daughter, Abbey (Hewson), in Santa Clarita, CA. The Hammonds are just sort of muddling through life, until one day, Sheila begins experiencing some “undead” symptoms. Now, she’s hungrier than ever before — for human flesh. As their lives descend into death and destruction, they realize that it sort of works for them.


Did someone say Season 3? pic.twitter.com/qBN0quswHW

What do you think? Are you a fan of the Santa Clarita Diet TV series? Do you plan to stream season three of this Netflix TV show?

So enjoy this show. Casting is spot on, sarcasm and cheeky banter are hilarious. Look forward to this!

Outstanding very funny show! My son turned me on to it, and I’m not disappointed. I had to check here, that season three was definitely on. Yea! but bummer that I will have to wait!

We think it is the funniest and best written show on TV period!