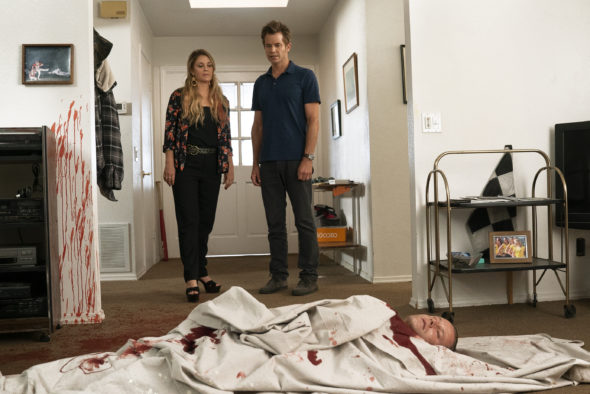 It’s all over but the flossing for Joel and Sheila Hammond. The Santa Clarita Diet TV show has been cancelled by Netflix. The third and final season of the series dropped on March 29, 2019. Since there will be no season four of the zombie sitcom, episode 30, the season three finale, “The Cult of Sheila,” will serve as the Santa Clarita Diet TV series finale.

A Netflix horror-comedy TV series, Santa Clarita Diet stars Drew Barrymore, Timothy Olyphant, Liv Hewson, and Skyler Gisondo. The action centers on Santa Clarita, California realtors Sheila and Joel Hammond (Barrymore and Olyphant) and their teen daughter, Abbey (Hewson). The Hammonds are just sort of muddling through life until one day, Sheila undergoes an enormous change. She begins experiencing some undead symptoms and a desperate hunger — for human flesh. As their lives descend into death and destruction, they realize that it sort of works for them.

Santa Clarita Diet has some good company. Quite a few Netflix TV shows have been cancelled after three seasons — the most notable (recent) one being the One Day at a Time TV series revival.

“The world had never known a ‘zom-com’ until Santa Clarita Diet, and we’re indebted to creator Victor Fresco for bringing this idea to Netflix,” the Internet network said in a statement. “To their endless credit, the incredible Drew Barrymore and Timothy Olyphant were totally game, with an uncanny knack for comedy that brought Sheila and Joel Hammond to vibrant life, even though one of them was undead. We’re grateful to Victor, Drew, and Timothy, along with fellow executive producers Tracy Katsky, Aaron Kaplan, Chris Miller and Ember Truesdell and the terrific cast, including Liv Hewson and Skyler Gisondo, and crew for three hilarious seasons for Netflix members to discover for years to come.”

Santa Clarita Diet executive producers also issued statement. In theirs, creator Fresco and Katsky, who was instrumental in developing the series, thanked the cast and (for the most part)( Netflix. The duo evoked the dark humor of the show with a witty jab at the streaming series’ cancellation, reveling that they got the call at noon today.

Like our audience, we were all-in on Sheila and Joel. Their relationship, in the face of incredible adversity, was inspiring to write and to watch. Mostly, they were funny, which in a comedy is important. Working with Drew and Tim, along with the immensely talented Liv and Skyler, was a joy and a once in a lifetime experience.

Netflix took at chance on this odd show and for that we will always be grateful. They were supportive, ever positive, and appreciative of our work. Until about noon today. Still, they were just one phone call away from being a perfect studio. Not bad.

Everything ends. This was a thing. And so it ended. We’ll miss it but are proud of the work we did and will always appreciate the love and enthusiasm we felt from our audience. It if was up to them, Sheila and Joel would continue for another 10,000 years.

Olyphant also kept with the comedic tone of the series. “I loved working on this show,” he said. “I’m going to continue coming in and doing scenes. If they don’t want to film it, that’s up to them.”

Meanwhile, Barrymore shared her gratitude. “Of all of the characters I’ve ever been, Sheila Hammond is one of my favorites,” she said. “She and Joel were an amazing couple, who had shared goals. And i am lucky to have worked along side Tim Olyphant. It was an honor to get to do something so delightful. Sheila lives forever in me. And I am grateful to Victor Fresco, who created a world so unique.”

What do you think? Have you watched all three seasons of the Santa Clarita Diet TV series. Is it ending at the right time, or were there more stories to tell? If it were up to you, would Netflix have cancelled or renewed Santa Clarita Diet for a fourth season? Sound off in the comments.

Please! TOTALLY more stories to tell!!. One of the sharpest and most unique shows on the air in years! I came to it late but binged it all and then found out it was canceled?!?!?!?!? Due to the cost of the episodes I heard. And contract that won’t allow it to be picked up by another platform. I am VERY disappointed in Netflix! This is my go to place for unique domestic and foreign shows. If cutting shows like this before they have run their course is the new policy at Netflix, I am going to look around at other… Read more »

The story is incomplete! What happens to Joel, and Sheila? Joel has a spider in his head, and Joel and Sheila are now both zombies and will need to keep finding new people to kill and eat. How will Abby react to that? How will they keep finding new people to eat? Will they go to prison, or will they both get killed? What happens next? Some network needs to pick up Santa Clarita Diet for Season 4!

Santa Clarita Diet was a great and unique show..
The acting, directing and writing were perfect.
Please come back !!

We neeed a season four this is a hilarious show and i told everyone i knew to watch it!!! All the good ones bite the dust Netflix!!!

We need season 4. Ii was one of the few series I would binge watch.