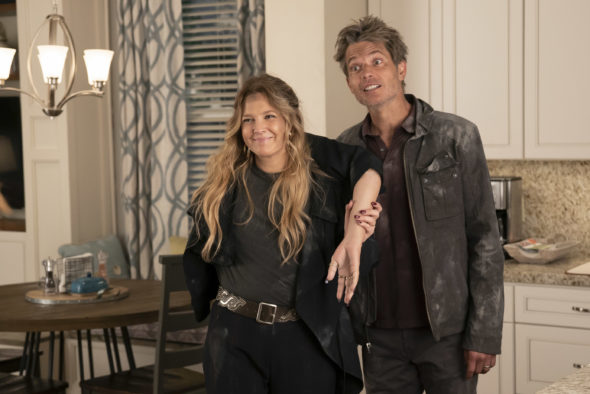 Is this the end of the Hammonds? Has the Santa Clarita Diet TV show been cancelled or renewed for a fourth season on Netflix? The television vulture is watching all the latest TV cancellation and renewal news, so this page is the place to track the status of Santa Clarita Diet, season four. Bookmark it, or subscribe for the latest updates. Remember, the television vulture is watching your shows. Are you?

A Netflix horror-comedy TV series, Santa Clarita Diet stars Drew Barrymore, Timothy Olyphant, Liv Hewson, and Skyler Gisondo. The action centers on Sheila and Joel Hammond (Barrymore and Olyphant). This suburban couple sells real estate and lives with their teen daughter, Abbey (Hewson), in Santa Clarita, CA. The Hammonds are just sort of muddling through life, until one day, Sheila undergoes an enormous change. She begins experiencing some undead symptoms, and she’s hungrier than ever before — for human flesh. As their lives descend into death and destruction, they realize that it sort of works for them.

Unless they decide to publicize viewership, it is hard to predict whether Netflix will cancel or renew Santa Clarita Diet for season four. The first two renewals came less than two months after the season premieres, and I suspect if they renew it again, they’ll again do so in about the same timeframe. Very few Netflix series make it to three seasons and even fewer make it to four seasons but I suspect this one will survive. Since that’s just speculation, I’ll keep an eye on the trades and update this page with breaking developments. Subscribe for free Santa Clarita Diet cancellation or renewal alerts.

What do you think? Did you think the Santa Clarita Diet TV show would be renewed for a fourth season? How do you feel now that Netflix has cancelled this TV series, instead?

PLEASE BRING IT BACK

I thought this show was really good and freakishly addicting. I do not understand why it got cancelled, seriously! Timothy Olyphant and the neighbor kid are hilarious, Drew Barrymore we always love her cuz we grew up with her and the daughter was a badass. Timothy Olyphant can play anything, any role, in any movie, and is in my top 5 favorite actors hands down! Has been since girl next door! The cancellation of the show is ********!!!!

Couldn’t have received better news! There is nothing humorous or entertaining about cannibalism! It is disgusting, morbid, and abominable! This show deserved to be canceled before it began! The people that made this show are sick and ghoulish!

Excellent writing and acting!! If no season 4, at least, wrap it up for us so we’re not left hanging in the balance 🙁

I am absolutely obsessed with this show!! I even got my 15 yr old watching it and he loves it too!! Please don’t cancel it!!!

I love this show. Saw the advertising for series 3 and watched the whole 3 seasons in 1 week. This is one of the best series I’ve watched in a long time. I’ve recommended this series to everybody I meet. Please don’t cancel, the chemistry between Drew and Timothy are amazing.

This is a great show and deserves another season! It’s quirky, fun, and the actors/actresses have fantastic chemistry.

I agree! Such a fun show! I’ll be so sad if it’s cancelled! Please don’t cancel

Great show, just discovered it Season 3. Got great A, B, C plots (and more). So smart, quick and funny, impeccable writing and acting. The lovable characters, set/setting and social commentary are interwoven into a gift that keeps giving on rewatches too, they real sell this show. I hope Barrymore, Olyphant and the rest of the talented cast, along with creator Victor Fresco decide to come back, and Netflix is smart enough to stay with them as their audience grows. Totally recommended.

We really enjoy Santa Clarita Diet & would hate to see season 3 Ep 10 be the end. Please, please take it on through to season 4,5,6 & more if possible. We love watching this at the end of the day, it just dyvvv