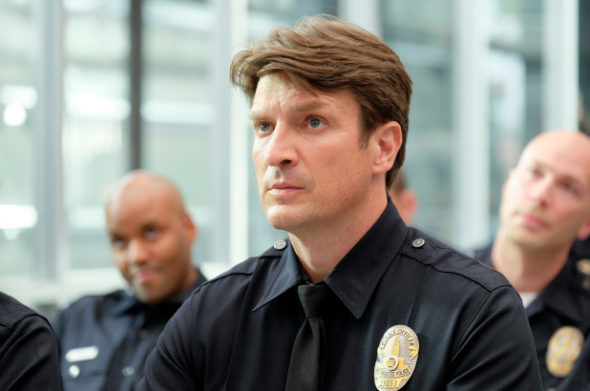 What’s next for The Rookie? Recently, showrunner Alexi Hawley spoke with TVLine about the future of the ABC TV show.

The police comedy-drama stars Nathan Fillion as a small-town guy who, after a life-changing experience, decides to pursue his dream of being an LAPD officer. Now he’s the oldest rookie on the force and the brass thinks he’s just having a midlife crisis. The cast also includes Alyssa Diaz, Richard T. Jones, Titus Makin, Mercedes Mason, Melissa O’Neil, Afton Williamson, and Eric Winter.

The Rookie just wrapped its second season. ABC has not yet announced a season three renewal, but Hawley says there are definitely plans for at least another season:

We definitely have to resolve where we left it, and Armstrong has to play a part in that. Nolan left him handcuffed and shot in the shoulder, so yeah, he survived. In [Episode] 301, we get into the “he said/he said” debate, presenting two versions of what Armstrong went through in the finale, which is two men scrambling to end up on top of this to prove the other wrong. I think that’ll be very dynamic.”

But how would the coronavirus affect the new season? Hawley says things would have to change:

Honestly, it’s a little up in the air right now. I would’ve had a different answer for you before we had the quarantine and before production shut down, but right now we’re still trying to figure out how to physically make this show and keep people safe. Can I do roll call scenes with 30 or 40 people in the room on set, with the doors closed and a drop ceiling? Just from a practical point of view, we might need to slow-roll those last 30 days. Do we “real-time” a bit more the first 10 episodes or so? Those questions are being talked about.”

What do you think? Are you a fan of The Rookie? Do you want a third season of this ABC series?

Not big on network tv, but “The Rookie” is one I tune in for.

Please bring the show back. I loved his other show and because of the actress it was cancelled. Don’t cancell this too. I have watched him since one life to live.

Please renew the “The Rookie.” Love the show and love Nathan

The Rookie is original and very well-acted. Hope it continues for many more seasons!

Terrific show,excellent scripts, so genuine, romance, adventure, happiness, sadness. It has it all.